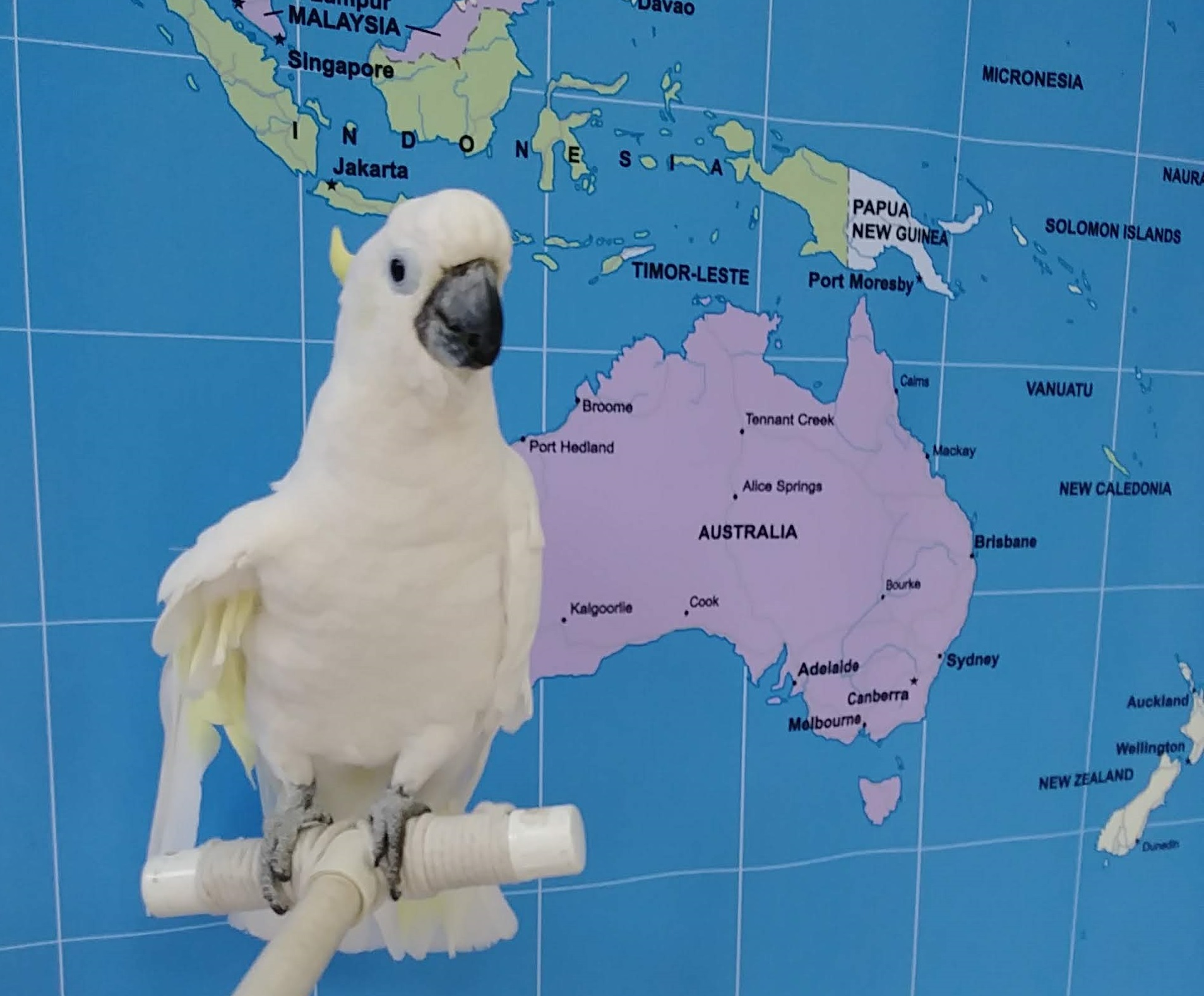 The Sulfur-crested Cockatoo is a large white bird with a pale yellow crest it can raise or lower at will. The same yellow can be seen on the underside of the wings and tail, and on the cheeks over the ear hole. They beak and feet are dark gray. The eyes of a female will be a reddish-brown while the eyes of the male will be dark brown.

Flight is a series of rapid, shallow wing beats interspersed with gliding. Cockatoos and other parrots have zygodactyl feet, with two toes pointing forward and two toes pointing back. This allows them to grip branches and perches better. They have strong beaks and even have a bone in their tongue to help them crack open nuts and seeds. 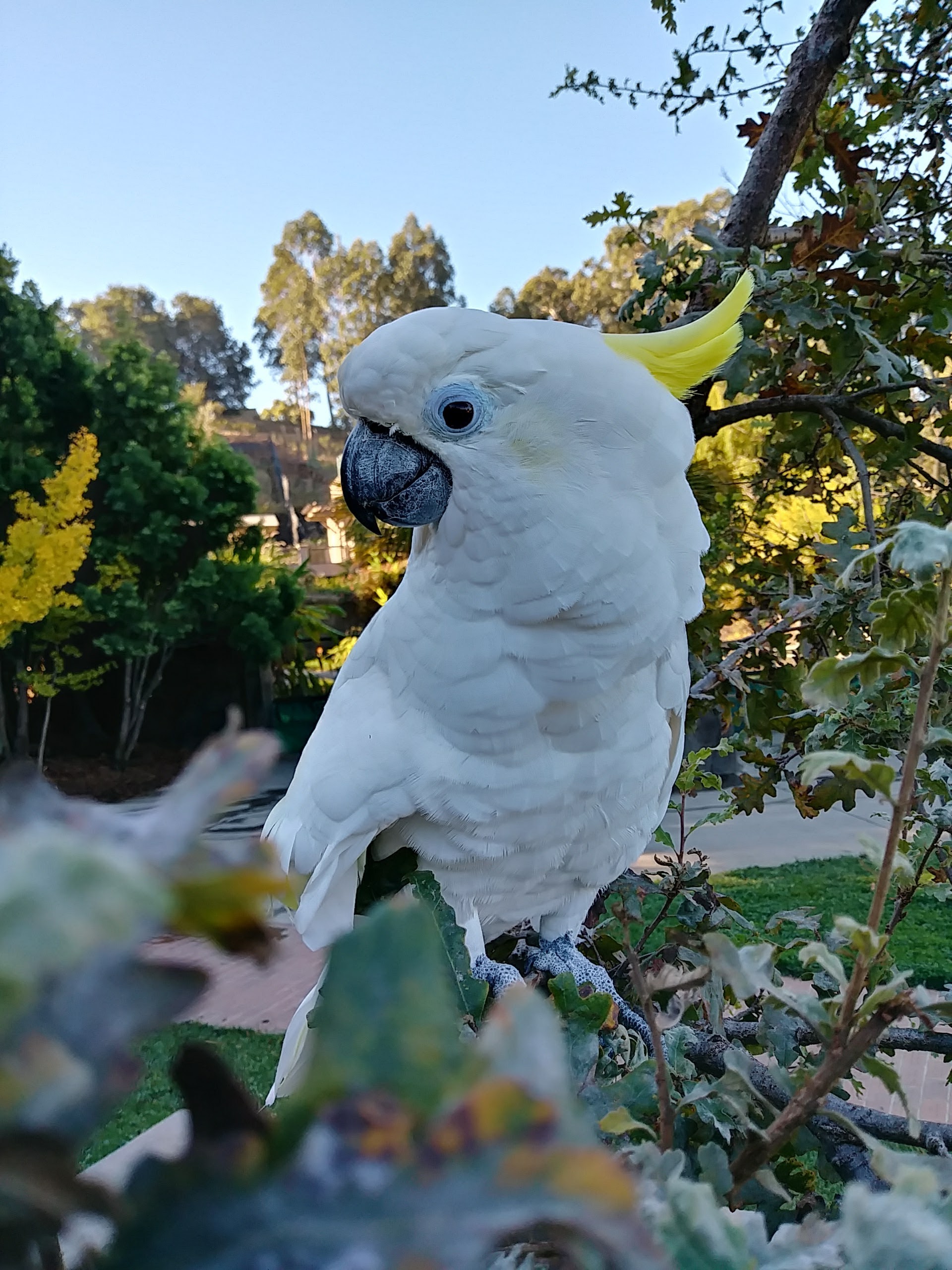 The world population for Sulfur-crested Cockatoo has not been quantified, though the population is in decline. Population density and home range for the individual bird is not known.

Possible seed disperser, though not much is known. Considered a pest on farms because they eat newly planted crops. 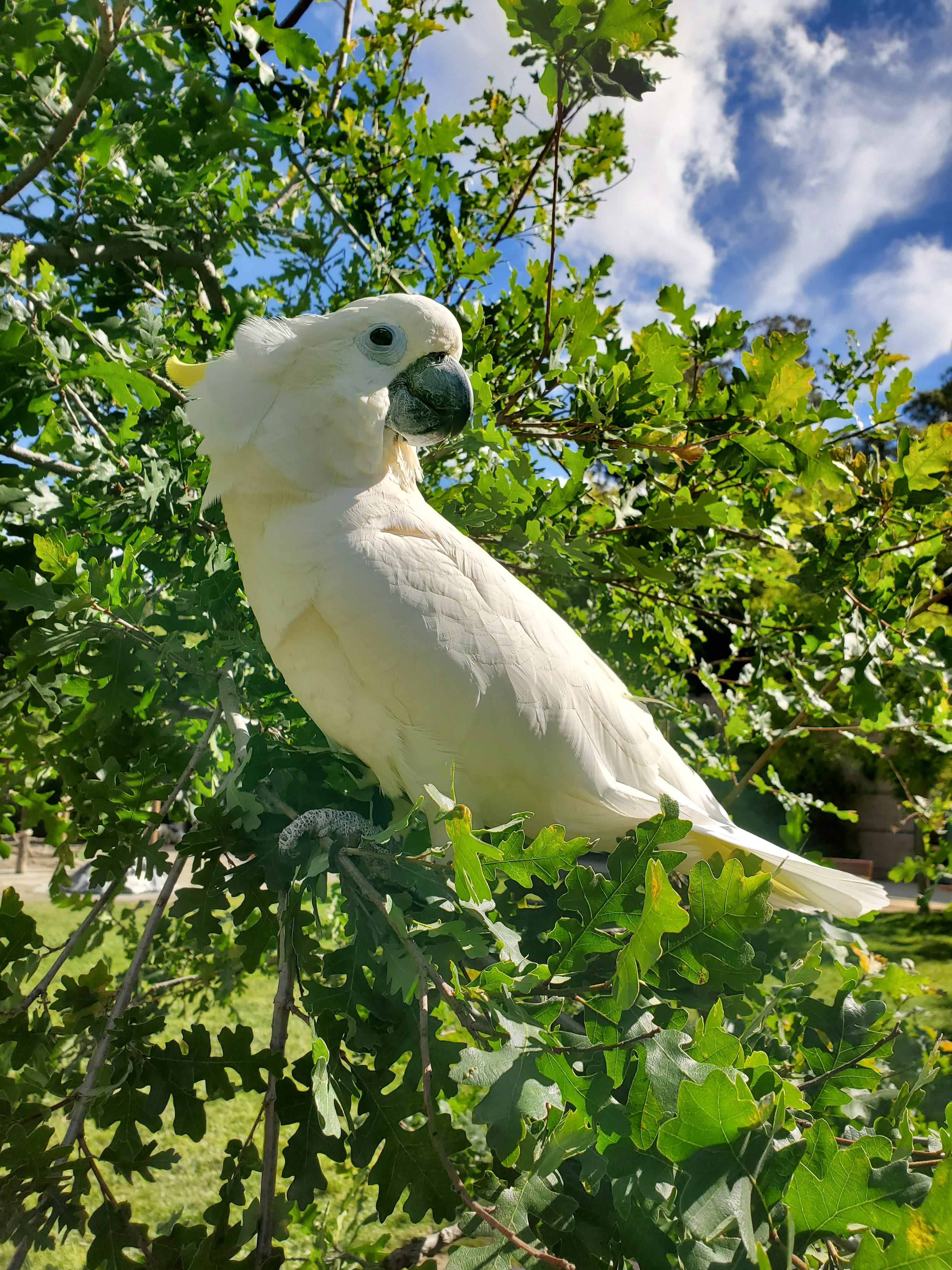 In the morning, Sulfur-crested Cockatoos form feeding flocks, generally eating on the ground. During the hottest part of the day, they sit in nearby trees for shelter. In the afternoon, they resume feeding and then return to the roosting grounds in the evening. Feeding grounds will be used day after day until the area is exhausted or there is no more food left, and thus vary seasonally based on food availability. Roosting grounds are hardly ever abandoned.

Sulfur-crested Cockatoos will keep their beak healthy by stripping and chewing bark and leaves when they are not eating, usually during midday when they are resting. Their typical call is very loud and raucous, meant to be heard over long distances through forest canopy. Sulfur-crested Cockatoos also use their crest to communicate; a raised crest can mean excitement, alarm, or be used during courtship.

Sulfur-crested Cockatoos will roost and feed in flocks. The largest flocks gather when they feed from the ground and in roosting areas. Otherwise, they are seen in smaller flocks or in pairs.

Breeding season for the Sulfur-crested Cockatoo varies; in the northern parts of its ranges, breeding season lasts from May until September. In the southern part of the range, breeding season is between December and August. Sulfur-crested Cockatoos are monogamous birds, pairing for life. Courtship begins with the male displaying by raising his crest, bobbing and making figure-eight patterns, and chattering softly. This is followed by mutual preening. The nest is made in a tree cavity, usually near a waterway, and lined with wood chips made from shaving off the wood from the cavity walls.

2-3 eggs are laid, about 1-2 days apart. Altricial offspring hatch after about 30 days, and stay in the nest until they fledge, at about 70 days. They remain with the parents year-round, and families stay together indefinitely. 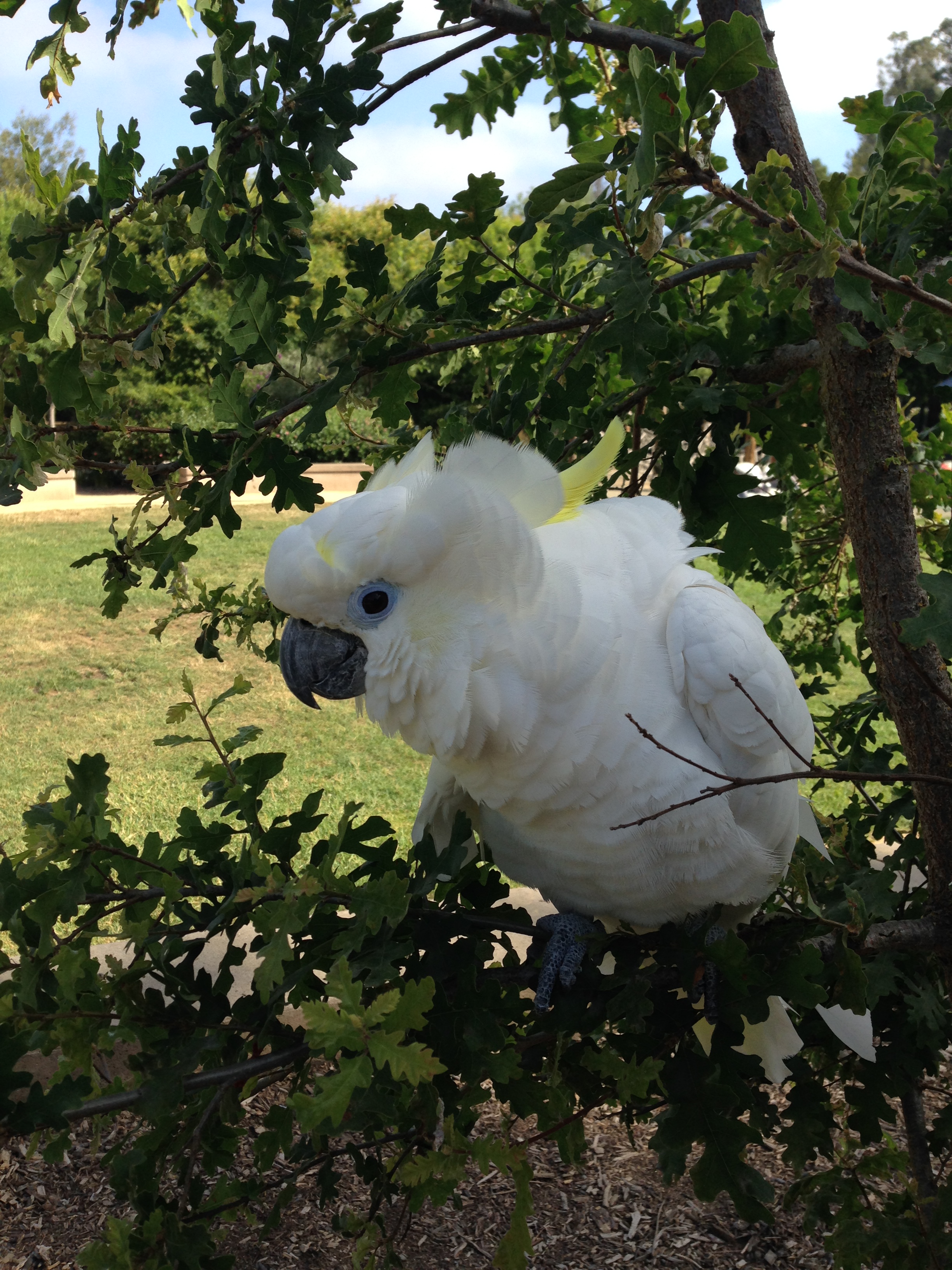 The Sulfur-crested Cockatoo is listed as Least Concern (2012) by IUCN, and is on Appendix II of CITES. The total population is large and has not been quantified, and they are even considered pests in some areas. Despite this, the population is considered to be in decline due to habitat destruction.

Not much is known on historical population of the Sulfur-crested Cockatoo.

The Sulfur-crested Cockatoo global population is in decline due to habitat destruction. Though they are protected under the Australian Commonwealth Law, hunting is allowed with a government permit.

If you are interested in having a cockatoo as a pet, do extensive research before deciding. Cockatoos are long-lived birds, and may outlive many humans. They require lots of stimulation, enrichment, and attention. If you are determined in getting a cockatoo or parrot, please consider getting a rescued bird as opposed to a young/baby one to avoid the risk of getting one that was smuggled from the wild (a very traumatic experience for birds) and supporting the illegal pet trade. The Oakland Zoo is a conservation partner to Mickaboo Companion Bird Rescue, a good organization to adopt from. 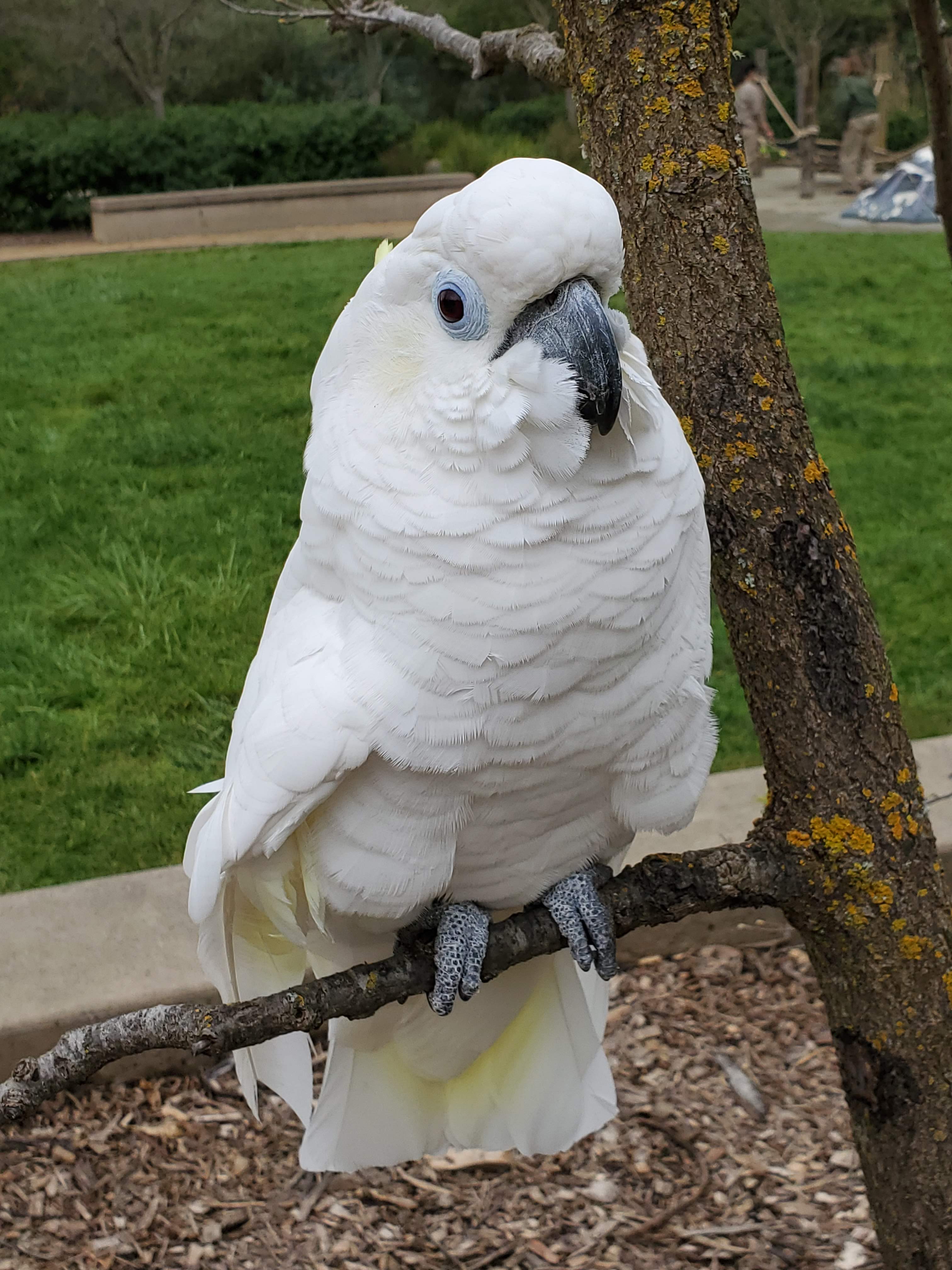 The erectable yellow crest can be up to 14 cm long.

While foraging for food on the ground, several Sulfur-crested Cockatoos will remain in the trees and act as sentinels. If a predator is spotted, they will give a deafening alarm call to alert the cockatoos on the ground.

When Cockatoos and other parrots fluff their feathers, it is a sign that they are comfortable.