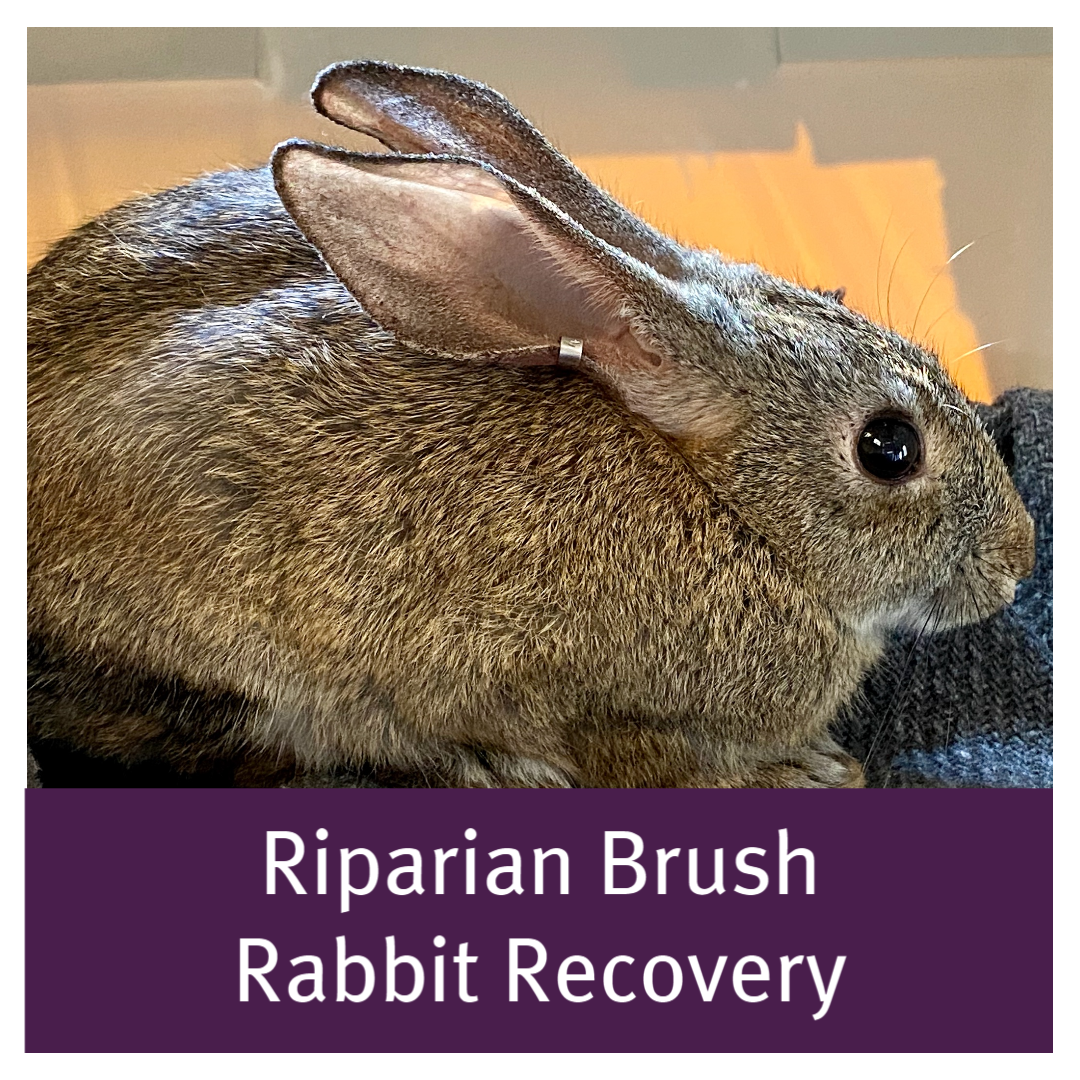 The riparian brush rabbit (Sylvilagus bachmani riparius) is a small cottontail, one of eight subspecies of brush rabbit native to California. They live in riparian oak forests with a dense understory of wild roses, grapes and blackberries. This small and lively rabbit is only found around the San Joaquin River, Stanislaus River, and South Delta channels. The population size is unknown, but likely less than 2,000 in total.

Rabbits are an essential part of ecosystems as herbivores and as a primary food source to other animals. Their place in the web of life is critical, and losing a rabbit species would have a negative cascading effect on countless interdependent species.

This endangered species has many challenges. About 90% of the places riparian brush rabbits live have been destroyed due to the growth of cities and farms, flood control and dams.

The current threat is Rabbit Hemorrhagic Disease Virus (RHDV2); a European-borne virus that has spread rampantly to many species of wild rabbit populations across the United States and Mexico.

Though the virus only attacks rabbits, it can be easily spread by birds, insects, or scavenging animals and is persistent in being infectious up to 3 months. Once contracted, the onset of symptoms (quickly followed by mortality) occurs within 3-9 days. RHDV2 has created a lagomorph crisis across the globe.

In May of 2020, the first RHDV2 case was detected in Riverside, California, threatening the Riparian Brush Rabbit.  The state needed to be pro-active their protection!

Oakland Zoo has stepped up to play critical role in a multiple agency effort to help prevent the possible extinction of the Riparian Brush rabbit.

In partnership with U.S. Fish and Wildlife Service, California Department of Fish and Wildlife, U.S. Geological Survey, and River Partners, Oakland Zoo has participated in ten ‘rabbit captures’ in the San Joaquin River National Wildlife Refuge in Modesto since August. The aim is to prevent the disease before it strikes with vaccinations.

Oakland Zoo is vaccinating wild rabbits to aid in their resistance to the deadly RHD virus, increasing their chance of survival when reintroduced into the wild.

Wild-captured rabbits are brought to Oakland Zoo’s veterinary hospital where they undergo thorough physical exams. They then receive the RHDV2 vaccination. Afterwards, they are closely monitored by Zoo veterinarians and staff to ensure that the vaccination has no adverse effects. Tiny video cameras are also used to watch the rabbits via computer, offering the least amount of intrusiveness on these wild animals.

Following the monitoring period, and once the project is deemed a success, the twenty Riparian Brush rabbits will be returned to the wild at the San Joaquin River National Wildlife Refuge in Modesto. Oakland Zoo will then help administer vaccinations to an additional 200 rabbits in the wild to protect them from the Rabbit Hemorrhagic Disease Virus.

Oakland Zoo is working with State and Federal agencies to hold an insurance population, ensuring that this species will not go extinct if the wild population is decimated.

• Be a good rabbit parent by spaying/neutering, vaccinating, and keep your rabbit safe and secure. Domestic pets are the #1 source of this virus spread into wild rabbits.

• If you want a rabbit as a pet, do your research to ensure they are the right pet for your family, and only work with reputable rabbit rescues such as the ASPCA, House Rabbit Society, or other independent rescue centers.

• Avoid using pesticides in and around your garden.

• Keep the local watershed clean and thriving by leaving no trace and participating in waterway clean-ups.

• Please check our Living with Wildlife resource page for more ways to co-exist with California Wildlife.