Fragmented populations in Central to So. Africa, mostly East Africa.

Adult lions usually have a plain unspotted coat, light brown to dark ochre in color. Cubs are marked with spots which sometimes persist on the legs and belly until they are fully grown. Male lions have a brown mane, which tends to grow darker and fuller as the animal ages. The tail has a black tuft at the end.

Lions are in the order Carnivora along with all other cats, and in the family Felidae. There are 36 species within Felidae. Panthera is the genus that includes, lions, tigers, leopards and jaguars, all the big cats.

Lions feed on a variety of large and medium-size prey. They prefer wildebeest (or gnu) to all others when the annual migration brings the vast herds through the pride's range. Otherwise they eat buffalo, zebra, antelope, giraffe, and warthogs. They also steal kills and carrion from other predators.

The roar of a lion can be heard up to five miles away and can be most intimidating up close. Territorial roaring is usually heard an hour after sunset. When separated they roar to let each other know where they are; females often call their cubs by roaring.

Lions are the only cats that live in large family groups. Each pride differs in size and formation, but a typical pride consists of two males and seven females and a variable number of cubs. Females are usually sisters and/or cousins that have grown up together. When the pride hunts as a group they employ an ambush that forces large prey into the waiting paws of the males. Females have the speed but lack the body weight to knock down large "family size" prey such as the wildebeast. Despite their tremendous power and adaptive efficiency, lions are more likely to fail than succeed in their attempts to kill.

Subadult males are driven out at 2-1/2 to 3 years of age and may go in a group with other males. Females mature in about two years, males a few years later. All big cats are induced ovulators, i.e. release of the ovum is brought about by the act of mating. The period of gestation for the lioness is between 105 and 118 days and usually three or four cubs will be born. Only one in five will survive the first year.

Curently listed as Vulnerable by IUCN, The Lion population is inferred to have undergone a reduction of approximately 43% over the past 21 years

Oakland Zoo is in partnership with the Uganda Carnivore Program is dedicated to the research and conservation of lions, leopards and hyenas in the northern sector of Queen Elizabeth National Park, which is located in southwest Uganda. In addition to scientific research and monitoring activities, an important component of the conservation activities involves working closely with the local communities to improve human-wildlife coexistence. 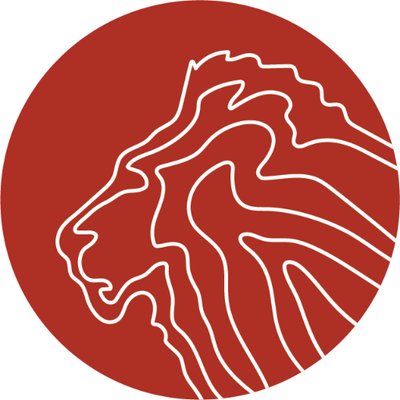 A lion is a digitigrade, or toe walker; that is his heel doesn't touch the ground.

His loud roar is made possible by the cartilage in his throat having ossified into bone (referred to as the Hyoid structure). This is true of all the big cat or "roaring" species. The smaller cats with the softer throat structure can only meow.