Geographic Range Ball Pythons occur in Sub Saharan Africa from the West coast of Senegal, Cot D'Ivoire Ghana Eastwards toward Chad, Sudan, Cameroon and Uganda up to the Nile River which makes a geographic border for the species. Sub Saharan Africa denotes the region of Africa directly below the Sahara Desert, South until it meets up with the Equator.

Considered a medium bodied snake, the Ball or Royal Python is the smallest of the Python species, reaching only 4-5 feet on average with longer individuals reaching 6 feet and weighing 3-5 pounds. The head is relatively small compared to their stocky bodies which can exceed several inches in diameter. Scale coloration is predominantly black with scattered, asymmetrical blotches of tan and browns.

Despite its lack of venom, a bite from a Ball Python will be painful as their mouth is equipped with roughly 150 needle sharp teeth about 1cm long designed to hook into and hold prey while the snake wraps its coils for constriction.

Anatomical: Like most snakes, Ball Pythons have a quadrate bone at the back of their jaw which allows them to open their mouth to sizes twice as big as their head. Additionally, a snake's chin is not fused together as it is in mammals, rather, they can open their mouth both vertically and horizontally allowing them to consume larger animals. Physiological: While most snake's sense of smell relies on their tongue to process chemical trails within their Jacobson's Organ, Pythons have the added advantage of having heat sensing pores on their upper lip called labial pits. These pits are able to detect wavelengths of light in the infrared spectrum and the signal is processed visually, meaning, Boas, Pythons and 'Pit' Vipers such as Rattlesnakes are capable of seeing a thermal image of their surroundings giving them an advantage in hunting in the dark as well as seeking out thermal refuges when temperatures are too hot or cold.

Ball Pythons live in regions marked by varying vegetation; vast grassland called the savanna defines the landscape with more scattered forests arising towards the southern extent of the range. Ball Pythons are capable climbers and are sometimes found up in tree branches, however the majority are found on the ground and in small mammal burrows.

Ball Pythons occur in Sub Saharan Africa from the West coast of Senegal, Cot D'Ivoire and Ghana Eastwards toward Chad, Sudan, Cameroon and Uganda up to the Nile River which makes a geographic border for the species. Sub Saharan Africa denotes the region of Africa directly below the Sahara Desert, South until it meets up with the Equator.

Ball Pythons will regularly eat anything that is twice the size of its head, which includes Rats, Shrews, Jerboas and other small mammals, Mice are considered too small and are not a regular prey item for Pythons, although strict eaters of mammals, they may consume birds if they can catch them.

Ball Pythons are the smallest Python species occupying a vast niche on the savanna floor throughout its range. It is a notable predator of small mammals, which if left unchecked would have a devastating ecological impact on the environment. 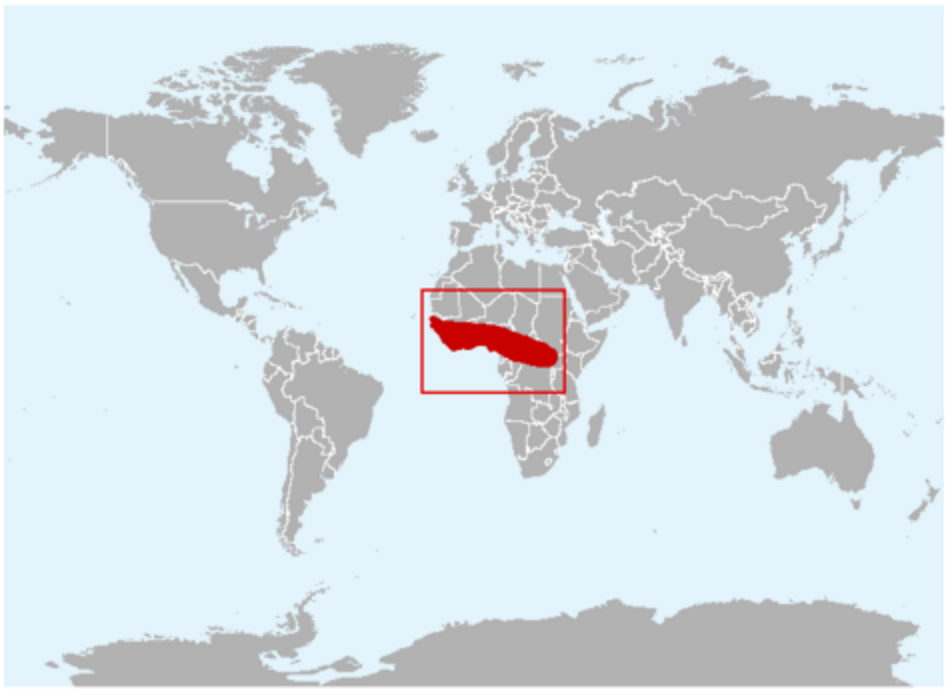 Considered a nocturnal predator, Ball Pythons spend the daylight hours concealed beneath leaf litter, fallen logs and rocks or in underground mammal burrows. Once darkness falls they emerge and begin hunting for their prey. Ball Pythons shed their skin as they grow, roughly every 4-6 weeks the snake will become particularly defensive and reclusive for 3-4 days or until their shed is complete.

Upon being threatened, Ball Pythons will retreat away into a hide, coil up and strike its aggressor and finally, they may roll up into a tight ball keeping their head in the middle in an effort to protect itself from potentially fatal attacks.

This snake is not considered social. Due to their location in Sub Saharan Africa the temperature will rarely drop below 80°F meaning this snake does not undergo a period of winter hibernation.

Ball Pythons will mate year-round as there is no defined hibernation period, however, females are most receptive in September through November which coincides with seasonal rains. Males will compete in combat for dominance and breeding rights. Once a female has mated she will find an appropriate hide beneath logs or in a burrow where she will lay typically 4-6 soft shelled eggs.

Young Ball Pythons are roughly 6 inches long and are capable of hunting on their own once hatching making them precocial. Their typical diet consists of baby mice and rats. 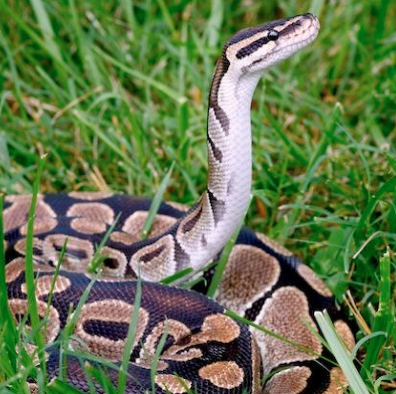 While the IUCN has listed the Ball Python as a Species of Least Concern, they note that particular care should be issued when collecting for the pet trade. Significant regulation has been put in place to control the capturing and trade of wild snakes which has grown in popularity since the 1990s.

Ball Pythons are still found in their historic habitats as there has not been much urbanization throughout their range. Notable exceptions would include areas cleared for agriculture and livestock although these snakes are welcome near these settings as they help to control the rodent population.

In an attempt to educate the public about the importance of responsible pet care the Oakland Zoo has 3 Ball Pythons who are used as animal ambassadors to the community. There are also Ball Pythons located in our African Village near our Monitor Lizard exhibit.

If you choose to get a Ball Python as a pet make sure you do your research to make sure your snake is not a wild snake. Wild Snakes may have diseases or parasites which can spread to other snakes within the supplier's collection which is not a responsible pet practice. 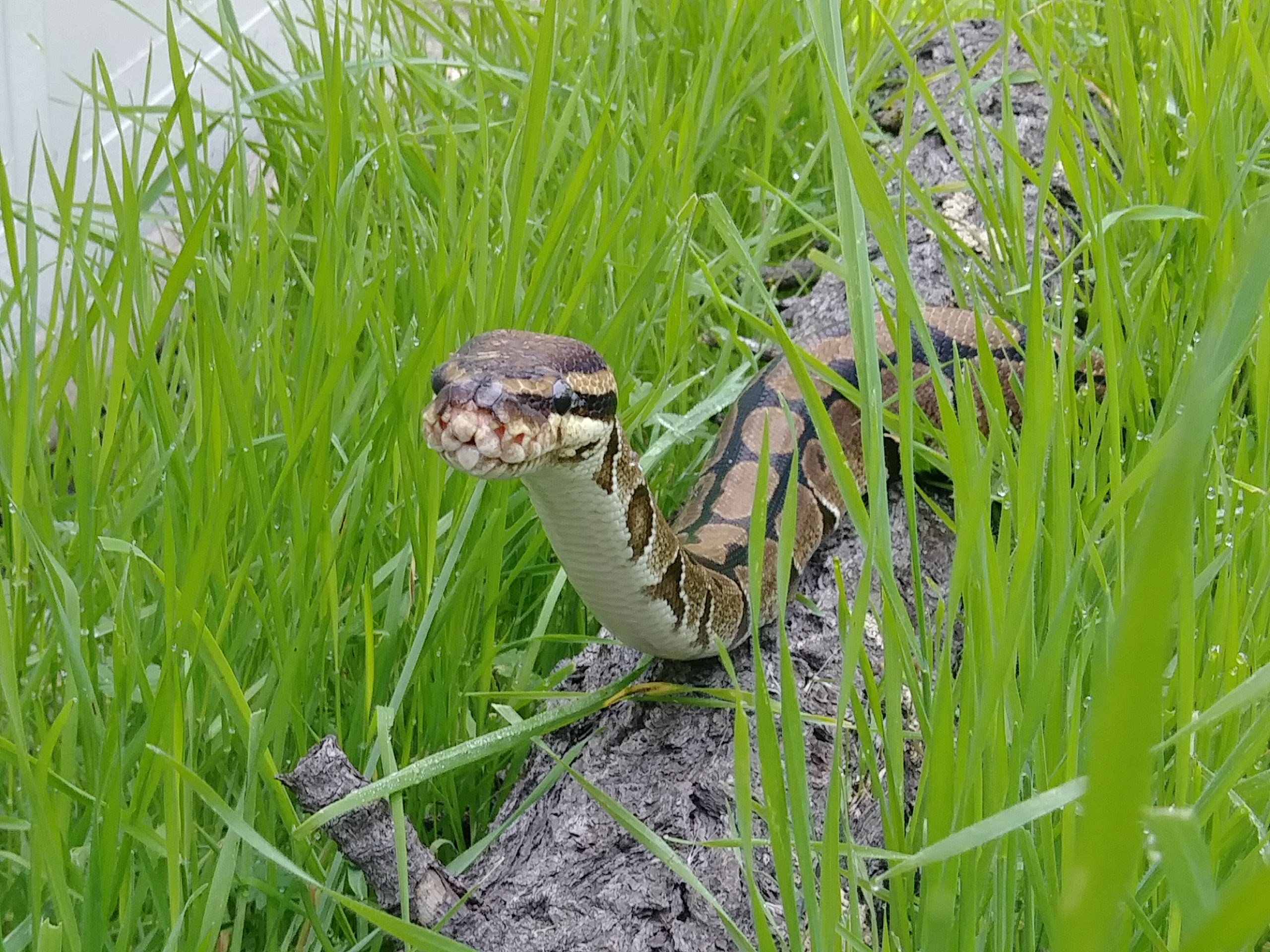 The Ball Python gets its name from the fact that when it is threatened or feels in danger, it will coil into a ball and stick its head tightly into the middle for protection!

The 'Royal' Python refers to its use as a decoration for many African tribal leaders.