Diet:
Snails, plants
Activity Time Frame:
Interactivity:
Sexual Dimorphism:
No
Gestation:
Females are ovoviviparous, a mechanism by which eggs develop and hatch internally, giving the appearance of a “live birth”
Lifespan in the Wild:
20 years
Lifespan in Captivity:
20+ years 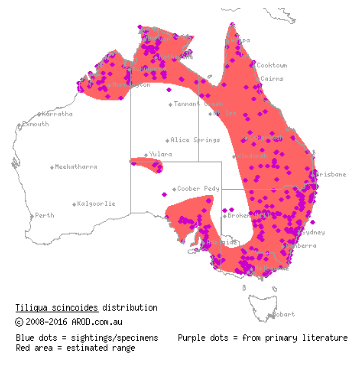 From snout to tail measurements, Blue Tongue Skinks average at 17 inches long. A stocky and robust head and body gives way to a short, stout tail, supported a few millimeters off the substrate by small, nub-like arms. A series of small, boney, overlapping scales create a light brownish grey coloring with patterns of darker browns to reds that tend to emphasize the terrestrial habitat of these animals. Scales are tightly interlocked and smooth, this helps with locomotion as well as keeping out dirt and debris. 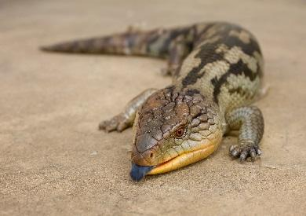 Habitats: Found throughout North West Australia in coastal, less arid climate, Blue-tongued skinks live principally in open country with lots of ground cover and mulch with which to shelter. This makes suburban farms, gardens and lawns ideal habitat for this animal.

Ecological Role: Skinks represent a biological transition between lizards and snakes. Blue Tongue Skinks play a vital role in the Suburban gardens of Australia, aiding farmers in pest removal this symbiotic relationship helps to conserve this species. Wild Diet: This typically slow moving animal lacks the agility to be a competent hunter, as such, it spends its time gobbling up the occasional snail or beetle with its strong, powerful jaws. Their omnivorous diet often includes flowers, fruit and other small insects. Predators: Snakes, Kookaburra, Dogs, Cats, Dingoes, Parasites, Falcons

Will open its mouth and display its blue tongue to trick predators into thinking it is sick and therefore not a good meal.

These animals are not considered social, however, from August to November they are in mating season, where, males will compete for access to females.

Breeding occurs after emerging from summer brumation, typically in the early fall, which in the Southern Hemisphere is March-June.

Litters of up to 10 skinks are born precocial, ready to fend for themselves upon leaving the nest.

Listed as Endangered on the ICUN skinks are prone to habitat loss and predation by household pets such as cats and dogs. Like most reptiles, the pet trade can negatively affect populations if animals are taken from the wild. It is highly encouraged to research your pet supplier prior to purchase to ensure your pet is from an ethical source!

While not much information is known on the historical range of Blue Tongue Skinks, they have adapted well to urbanization by utilizing urban gardens as a source of food, and are not considered pests by farmers.

Our Blue Tongue Skink is part of a community education program designed to educate people about the importance of responsible pet ownership and animal needs.

Farmers putting out poison for snails are also harming skinks who will eat the snails. Help Wildlife by not using poisons on your garden, because you may be accidentally poisoning friendly animals.

Can drop its tail to escape predation, will use its blue tongue as a warning sign to potential predators, eats snails in urban gardens!