All over the world in almost every type of terrestrial biome 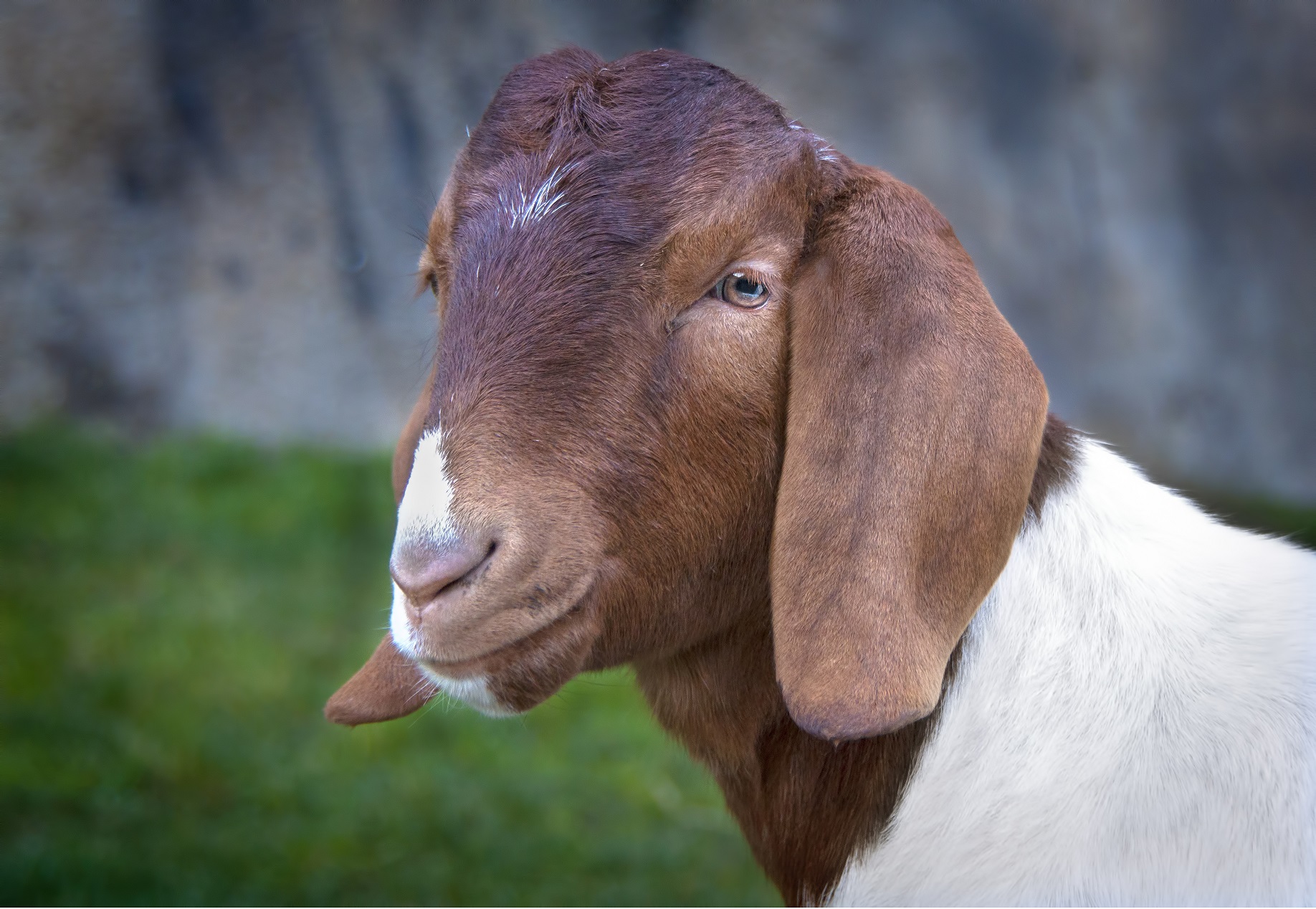 Goats are chordates belonging to the Bovidae family along with gazelles, antelope, bison, cattle, and sheep. Unlike cattle and sheep, who are grazers, goats are selective browsers. Goat eyes have yellow or brown colored irises and rectangular pupils. Their hooves are cloven. Domestic goats can have combinations of yellow, chocolate, or black coat colors. They are crowned with hollow-horns that arch backward. Some goats are polled, which means they are genetically hornless. Some have scimitar (corkscrew) horns. Both males and females have horns. Goats have short tails.

Domestic goats are descended from the Pasang, Bezoar, and Markhor. Goats were domesticated in West Asia 9000-7000 BCE. We can still find wild Mountain Goats (Oreamnos americanus) in the north/west states of America. There are more than 200 breeds of domestic goats (Capra hircus). There are 3 main types of domestic goats: meat goats, milk (dairy) goats, and fiber producing goats. Angora and Cashmere goats are descended from the Markhor and raised for their fiber. The population growth of Cashmere goats in uncontrolled due to an increase in production for their wool. Cashmere goats are overloading ecosystems and affecting certain indigenous species in India, China, and Mongolia. Boer goats are meat goats origianlly from South Africa. They are horned with lop ears. Boers have an extended breeding season. LaMancha goats are raised for their milk in the USA. They are a hardy breed with gopher or elf ears. Nubians are also milk goats. There are several varieties of Nubian goat originating from North Africa, India, the Middle East, the UK, and the USA. Nubians have long legs, long ears, and a large nose.

When browsing, goats can selectively grab feed with their lips. Goats have a four compartment stomach. The four stomach compartments are called the rumen, the reticulum, the omasum, and the abomasum. Plant forage is hard to digest. The rumen contains bacteria to help break down the botanical fibers, allowing the goats to access and absorb the nutrients from their selected browse. The rumen can hold 4-6 gallons of feed, the reticulum can hold up to half a gallon, the omasum can hold up to 0.26 of a gallon, and the abomasum can hold up to 1 gallon of feed. Their intestinal canal is 100 feet long for nutritional absorption. It takes 11-15 hours for food to pass through their digestive system. Some breeds can jump more than five feet high. Goats have unique hooves that allow them to climb the side of a mountain on little ledges the size of a dime. Goats can run 15 miles per hour. Larger goat breeds run faster. Goat vocalization is called bleating. 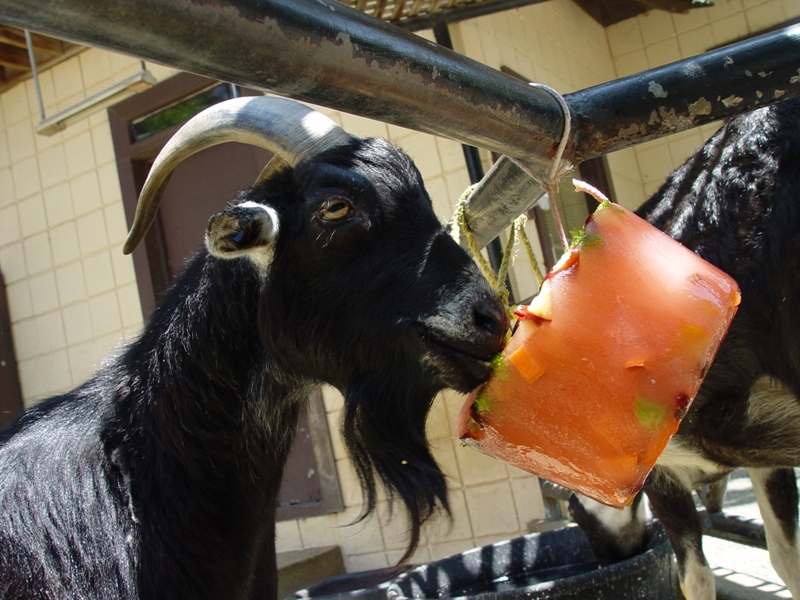 Domestic goats are raised all over the world in almost every type of terrestrial biome.

Domestic goats have a wider distribution than any other domesticated herd animal.

Ruminant, herbivorous browsers. Feeds on grasses and roughage, such as shrubs, woody plants, weeds, briars, bushes, trees, desert scrub, and aromatic herbs. Goats do not like to graze close to the ground. They can stand on their back legs to reach tree branches or shrub. Here at the Oakland Zoo our goats primarily eat grasshay and alfalfa with some grains. Our goats browse on pasture shrubery, bushes, and pieces of wood.

Goats graze on plants encroaching on grasslands and out-competing natural resources. Goats are used to eat unwanted plants by targeting vulnerable seedlings and saplings, thereby reducing and slowing encroachment. This type of management is known as "prescription grazing techniques," "targeted grazing," or "managed herbivory." The weed management of invading, exotic plants is a food source for the animals and saves managers the cost and time of removal to help restore ecosystems. Goats are a sustainable tool to control unwanted vegetation. Many California cities use goats to help prevent massive wildfires. A herd of goats can help keep grasses and other potential wildfire fuels in check. Goats are kept grazing on hillsides year-round. In nature preserves with steep hills they eat invasive grasses and dried brush. After the goats have grazed the native plant ecology can be reestablished. Goats can walk up and down steep hills because they are good climbers. The goats clear the alien grasses that burn easily. These grasses increase the frequency of wildfires 2-3 times. The likelihood of wildfires has also gone up due to climate change making it easier for these plants to spread out and outgrow native plants. There is a herd of 750 fire prevention goats in the Oakland Hills that manage vegetation on 66 acres to provide a fire break. Knowland Park grazing usually begins around June 1st every year, so keep an eye out for our Oakland fire goats while around the Zoo! 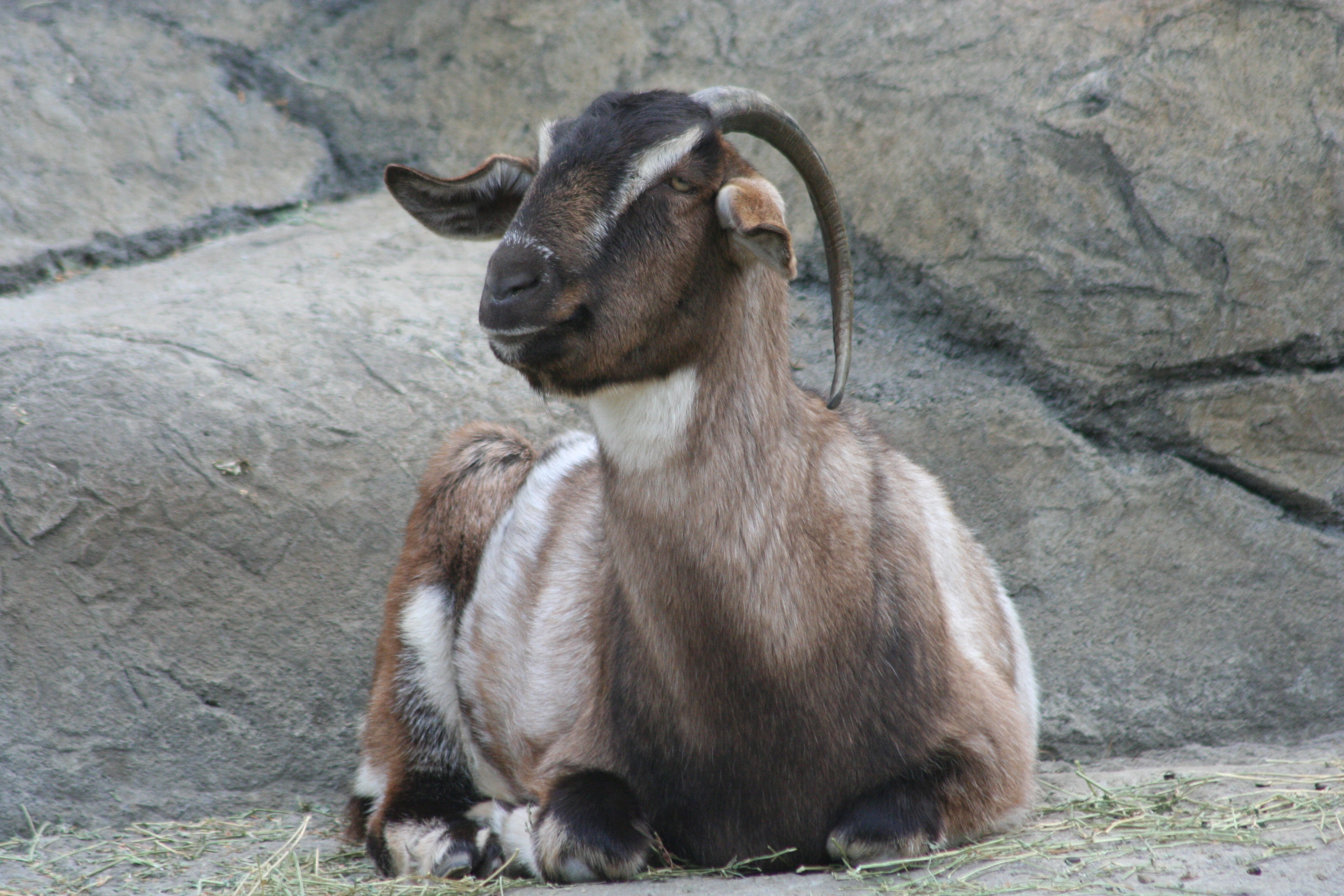 Domestic goats sleep five hours per night and take short naps throughout the day. They are more active in the morning hours when temperatures are milder. Most of their time is spent eating, but they adjust their daily activity to minimize stress caused by environmental conditions.

Goats take dust baths to keep parasites off their bodies.

Seasonal breeders. Females go into estrous in the late summer and cycle through January. Gestation lasts about 5 months, 150-180 days. Intact males are bucks or billys. Castrated males are wethers. Females are does or nannies. Offspring are kids. Kids are born in the Spring.

At birth females weigh 3-9 lbs. Males are 0.5 lbs. heavier. Twins are 1 lb. lighter. Does can give birth to triplets as well. Kids walk within minutes of birth. They are weaned by 3-4 months of age. 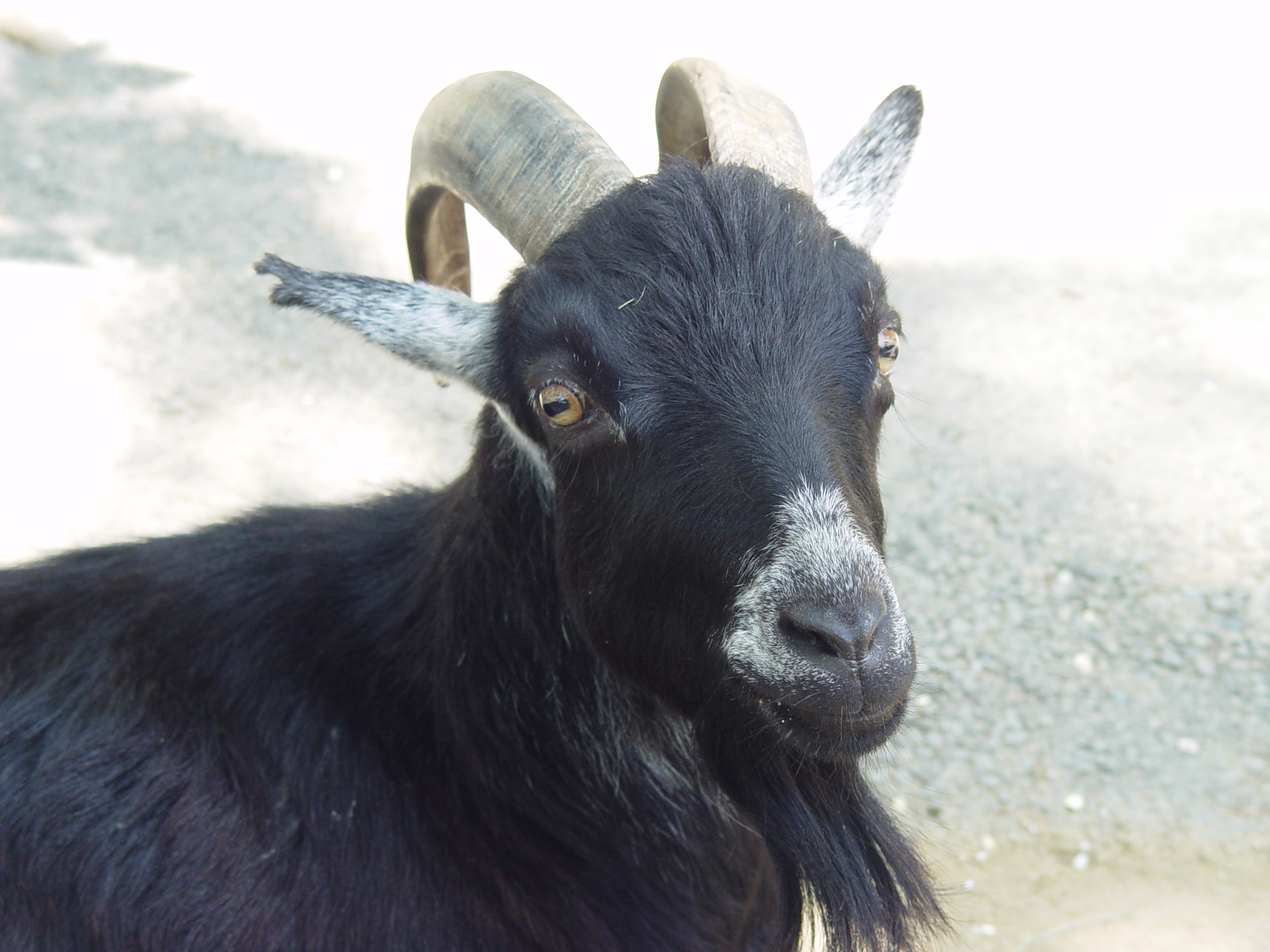 Goats are one of the oldest domestic species. They are kept all over the world as a resource for meat, milk, and fiber. They orginated in the Fertile Crescent of West Asia from bezoars (Capra aegagrus). There was a major goat population expansion in the late pleistocene era more than 10,000 years ago. Now goats can be found on all continents except for Antarctica. Around 840 million domestic goats are kept worldwide.

Wild Mountain Goats are naturally threatened by avalanches, rockfalls, landslides, falls, and malnutrition. Human threats include hunting, development and winter recreation in formerly inaccessible habitat. The global gene pool of domestic goats (livestock) is at risk of disappearing due to increased animal husbandry systems the used a limited number of breeds. The biggest genetic loss has occured in Europe. The largest number of goats are in the poorest countries with difficult environmental conditions. Goats are an indespensible resource in regions with poor communities.

The City of Oakland hires fire goats to reduce wildfire danger by eating flammable grasses around the Oakland Zoo. Keep a look out in the summer months for Goatland Zoo!

Come visit our goats in the contact yard of Wayne and Gladys Valley Children's Zoo! Talk to our Teen Wild Guides and Animal Care Keepers to learn more. 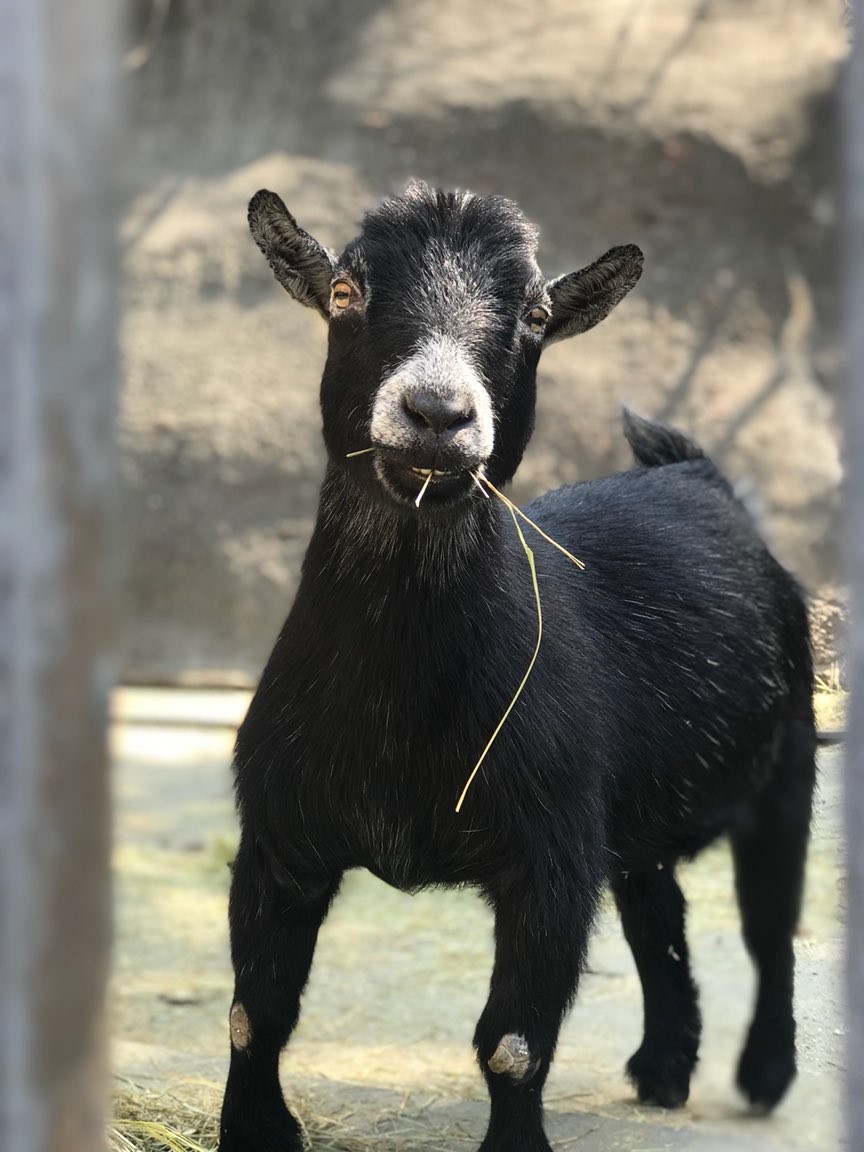 Goats don't shed their horns, so their age can be determined by counting the annual growth rings.

What's the difference between sheep and goats? Goats have 60 chromosomes, while sheep only have 54. Goats have tails that point up and sheep tails point down. Goats are independent and curious. In contrast, sheep like to flock and are aloof. A sheep's coat doesn't stop growing and has to be sheered. Goats don't have to be sheered. Both sheep and goats can have horns!

Goat milk is consumed by more people worldwide than any other animal milk.

One to two goats can supply a family with milk for one year and can be kept in smaller living quarters than a cow.