south and southwestern portions of Madagascar 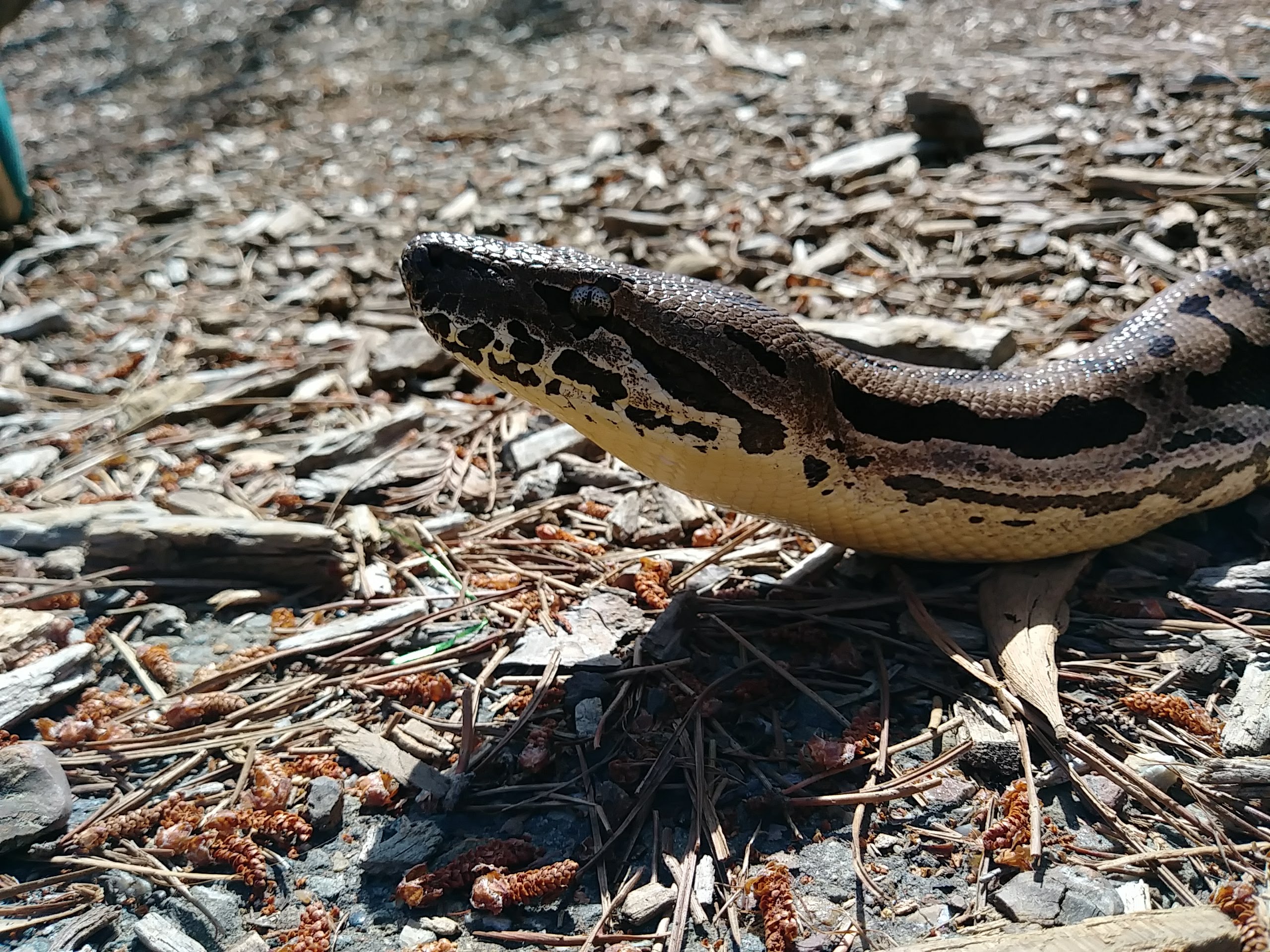 The Dumeril’s Boa is a large, heavy bodied, ground snake found exclusively on the island of Madagascar. They are typically 4-6 feet long, but can reach up to 7 feet, and can weigh up to 20 lbs. Their mottled brown, tan, and black bodies help them to camouflage with fallen leaves on the ground.

The brown, tan, and black patterns on this snake's skin helps it to blend in with fallen leaves on the ground. Like most snakes, Dumeril's Boas have a forked tongue, which they use to detect scents. Odor particles are pulled into the mouth, using their tongue, and transported to their Jacobson's organ, located on the roof of the mouth. This organ helps the snake to determine what it is smelling. This is most useful when these snakes are trying to locate prey, or detect chemical communication from other Dumeril's Boas. 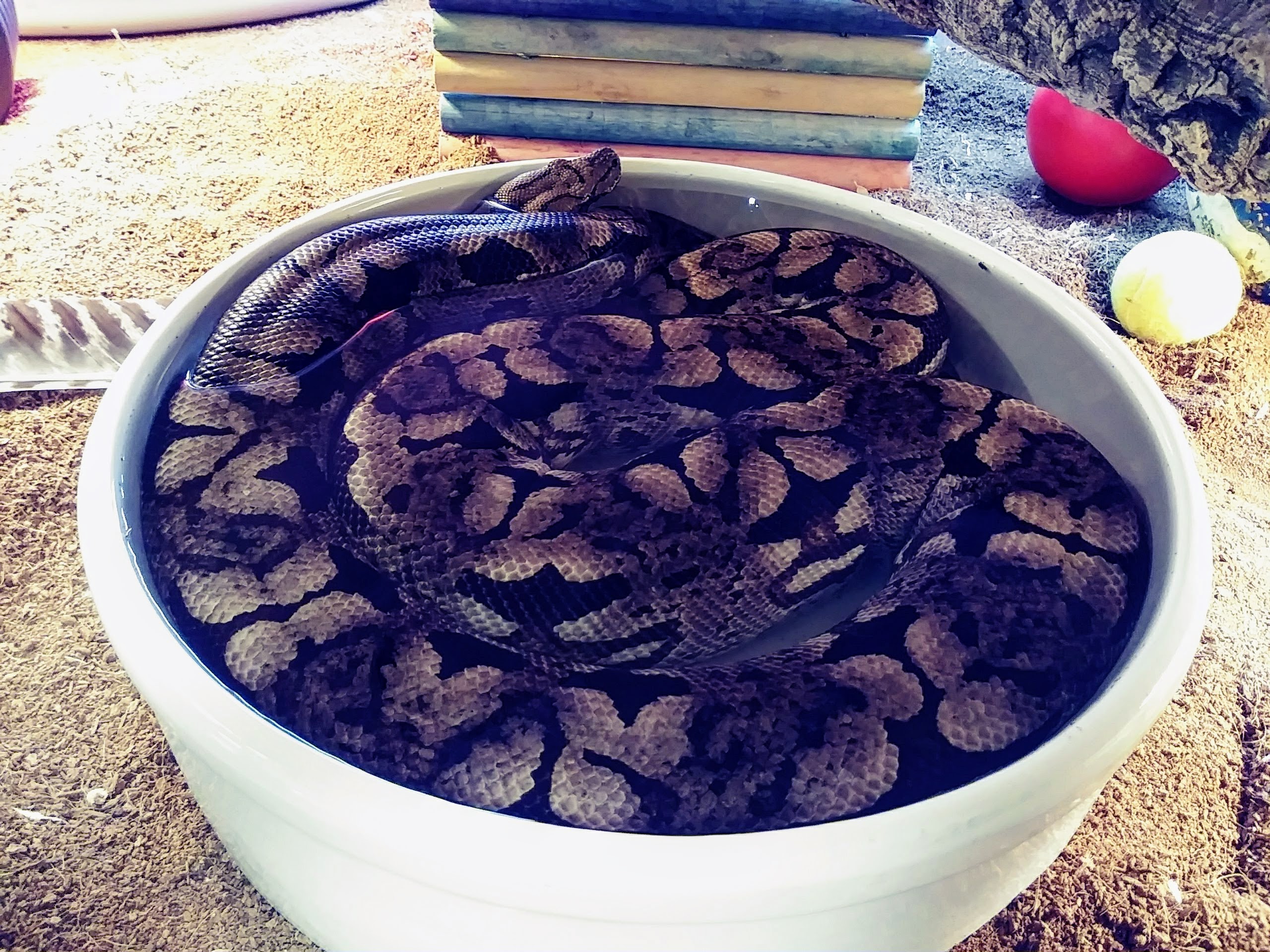 Dry forest and thorn bush at low and mid elevations. They can also be found in the savannas on the central highlands of Madagascar.

Dumeril's Boas play an important role in their ecosystem by controlling the populations of rodents and other small animals.

As juveniles, Dumeril's Boas are nocturnal. However, older snakes tend to be cathemeral, sleeping intermittently throughout the day and night. These snakes are ambush predators, meaning they spend much of their time sitting still, waiting for a prey animal to walk by. If a prey animal gets close, the snake will strike and grab onto the prey with its curved teeth, while it wraps its muscular body around the animal, and squeezes until the animal stops breathing. The snake will then swallow the animal whole. During the winter, these snakes undergo a short period of brumation, which is similar to hibernation in mammals.

Dumeril's Boas are ambush predators. They conserve their energy by laying still in one spot for a while, and waiting for an unsuspecting prey animal to walk by.

Although these snakes are solitary for most of the year, they do come together to find mates in the spring time. Once a male and female find each other, the male will use his "spurs", which are small vestigial projections near their pelvis, to stimulate the female. If she is receptive, the two snakes will align their bodies, and the male will insert one of his paired reproductive organs, called hemipenes, into the female's cloaca. Dumeril's Boas are ovoviviparous, meaning that their eggs develop inside of the female's body, and stay there until they are ready to hatch, about 7 months later. The young of this species are larger than most snakes, measuring around 1.5 feet long when they hatch. This large size helps them to avoid predation, since they live on their own after hatching.

Ovoviviparous, 6-8 young, around 1.5 feet in length when born, no parental care.

Although numerous in Madagascar, Dumeril's Boas are on the endangered species list and are listed in Appendix 1 of CITES, meaning that it is illegal to trade this animal internationally.

Dumeril's Boas are sometimes killed to be used in the leather trade, or to be eaten. Some are also taken from the wild to be sold in the pet trade.