There are up to 32 subspecies of gray wolf with variation in color from white through cinnamon, gray, and black. In North America, wolves are often a mix of browns, tans, and gray. Muzzle is usually lighter in color, longer, shaggier hair around the neck and shoulders form a mane. Large, rounded ears usually held erect, and long legs with large paws.

Formerly the world's most widely distributed mammal. Gray wolves are the most mobile canid species.

Their thick fur (they shed their winter coats as the weather warms) provides insulation with long guard hairs to keep moisture away from their skin. Their long legs and posture allow for flexibility in their movements; they can travel great distances with ease and can sprint relatively short distances. Their paws and claws provide traction and can spread to allow for better support in snow. Their hearing and sense of smell are very keen, allowing for an incredible awareness of their surroundings. 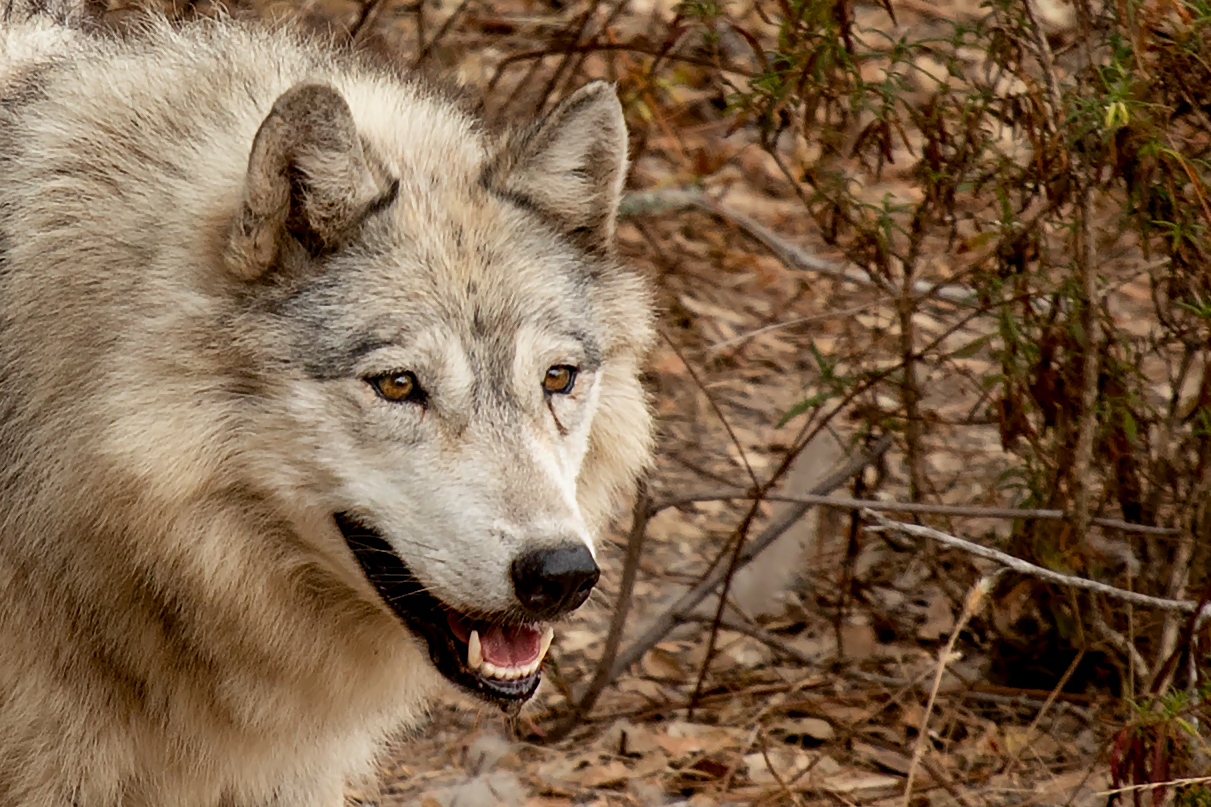 Packs generally have territories that range from 50-200 square miles. Densities can vary from about 1 wolf/7.5 square miles to 1/75 square miles. Packs in highly productive environments, such as Yellowstone, have territories of about 100-200 square miles, while wolves living in the Arctic and dependent on caribou may use areas of 20,000 square miles or more. They are habitat generalists, so one home range include many different types of landscapes. They can travel as much as 40 miles a day while hunting and often use semi-regular routes ('runways') through their territory. Dispersing wolves who are leaving their pack can travel as far as 600 miles.

Ecological Role: The wolf's niche is that of the northern predator upon large mammals. Besides humans and the wolf, the only other animals that regularly prey on large mammals in the Northern Hemisphere are cats (mountain lions in North American and tigers and leopards in Asia). Cats rarely reach the density and distribution that wolves can, however. Wolves are considered an apex predator. Prey: Generalists, hunting mostly large hoofed animals such as moose, elk, deer, sheep, goats, caribou, musk oxen & bison. More than 60% of their prey are young, weak, or older animals. Smaller mammals such as voles, beaver, and hares supplement their diet. Fish, birds, berries, & carrion are consumed seasonally, depending on location. They are also scavengers, and carcasses are known attractants for them. They are adapted to a feast-or-famine diet and cache food. 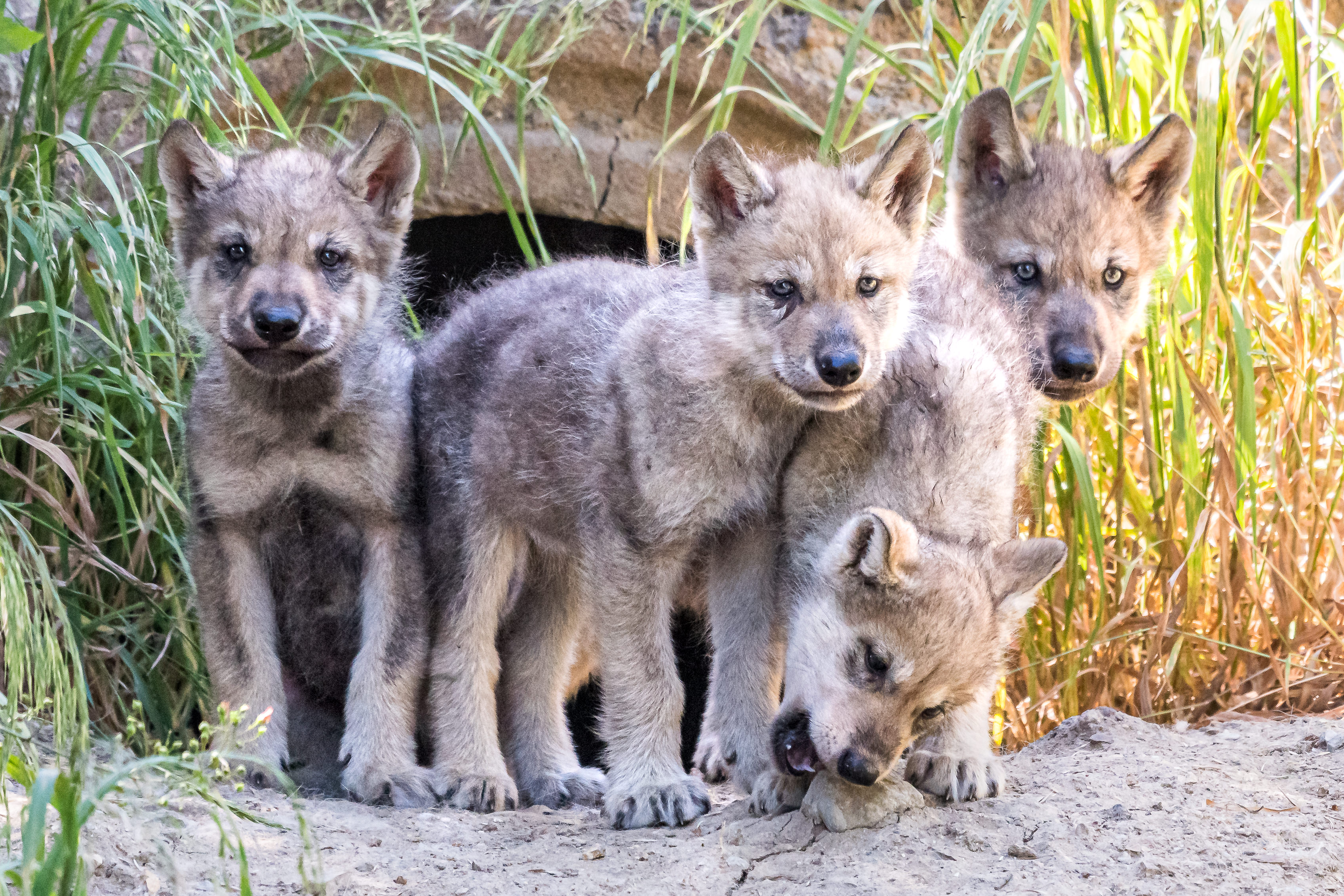 Classified as arrhythmic, meaning they lack a particular time of period when they are most active; they have no normal activity pattern. Gray wolves have adopted more secretive and nocturnal activity patterns in parts of Europe were they coexist with people.

Wolves would probably not have become so widespread had they not adapted to living in packs. Their social nature and ways of communicating have allowed for a worldwide range, as well as the ability to take down larger prey. Though their role in ancient times was as a mesopredator, they have become an apex predator in ecosystems today.

Most wolves live in packs with an average of 2-12 members (with an average of 6), though there can be more if prey is available (up to 36 was found in Alaska). In the summer, packs are smaller because their diets are more diverse. Winter hosts larger pack sizes due to integrating pups into the pack and the necessity to take down larger prey items. Packs contain parents, pups, offspring from other years, and other relatives. Rank positions are not permanent, and contests are most intense during the winter breeding period. Communication includes vision, sound, and smell. Usually howls are a territory call; lone wolves rarely howl.

The alpha pair is usually the exclusive breeding pair and often mate for life, however other pack members can also breed. Gray wolves commonly disperse over 30 miles before settling in a pack and reproducing. Packs generally produce one litter annually.

Litters range from 3-12, with an average of 4-6 pups. The size of the litter correlates to the size of the wolf population in the area, amount of prey available, and other environmental stresses. For example, when pack sizes are large, litter sizes are small, and vice versa.

Hundreds of thousands of gray wolves roamed wild throughout North America. During the 19th and 20th centuries, as the human population grew, people began to compete with wolves for game and habitat. Wolves were also viewed as pests and vermin, and were slaughtered by the thousands. As a result, wolves nearly disappeared from the lower 48 states. Wild wolves fear people and rarely pose a threat to human safety, however, fear and misunderstanding are still a challenge to their survival. Gray wolves have started ranging back into Northern California and establishing territories here! Farmers and ranchers still have concerns about livestock predation, and it is the aim of Oakland Zoo to mitigate this through programs and partnerships so the wolves are able to make a comeback.

Ranger Stewards Sponsorship: Through CSC Sponsorship, a Range Steward position has been created and Bre, a rancher, has been hired in the Lassen area. This position is an exciting new venture for CSC. Our Range Steward will ride on horseback, instigating prey behavior in cattle, keeping wolves away, and creating a positive relationship between conservationists, wolves, and ranchers. Round Up for Wolves at the Gift Shop. Say YES to Round Up for wolves at our Gift Shop your change will support the Ranger Steward Program. Wolf Friendly Beef: We are premiering Wolf Friendly Beef within our SSA facilities. This will encourage other ranchers to become a certified wolf-friendly ranch, working in co-existence with wolves and other predators. Further Connections: Education programs to bridge the gap between rural and urban communities - as it is this gap in respect and understanding that places a huge burden on the wolf. Bringing urban constituents/Oakland Zoo eco-trips to rancher homes where they can meet the ranchers we work with and learn of the conservation successes this community has had.

Wolves are generally accepted as the most likely ancestor of today's domestic dogs. In science, domestic dogs are a subspecies of wolf (Canis lupus familiaris). Recent molecular evidence suggests that dogs may even have been domesticated as much as 100,000 years ago.

Wolves have caused no human deaths in North America for over a century and the most recent recorded attacks by wild canids on humans involved rabid animals.

In the United States, 79% of sheep and 83% of cattle depredations are due to canids, with 15% and 18% of these losses (respectively) due to domestic dogs and the rest due mostly to coyotes. This means that though wolves are often blamed for livestock deaths, they are most often not the predators to blame.

All current canines originated in North America. First they crossed the Bering Strait to arrive to Asia and Europe, then reached South America when they could cross Panama.

Our male wolf Sequoia was a resident of California Wolf center and our female Siskiyou from another conservation facility in Montana prior to coming to the Zoo in December of 2017. Both wolves were born coincidentally two days apart in 2013. The perfect match! Sequoia is distinguished by his darker coat and long, lanky legs. Siskiyou is much lighter in color and often described as "fluffier." On May 11, 2019 Siskiyou gave birth to 4 beautiful wolf pups: two males named Arroyo and Lassen, and two females named Sonora and Anza.