Guira cuckoos are native to South America. They can be found from southern Brazil south through Uruguay, Paraguay, Bolivia and northeastern Argentina. 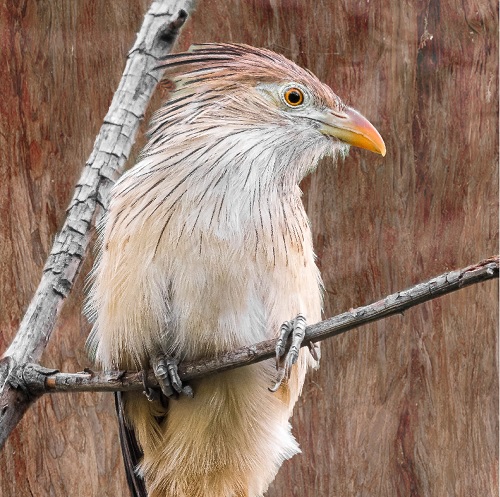 The guira cuckoo is a medium sized bird, easily identified by the distinctive head and neck feathers, giving it a spiky or scruffy appearance. The feathers on the head and back of the neck are a medium sandy rufous color, streaked the dark brown. The eye is orange, surrounded by light bare skin. The ear is visible. Feathers on the throat are grayer and less spiky. The back and wings are dark brown, liberally streaked with white. The sides are a warm buff color, and the tail is long and dark brown. The two outmost feathers of the tail have a light band across the top and bottom. The legs are a dark gray, with zygodactyl feet. The beak is thick, with a downward curve, and is more orange on top and golden yellow on the bottom. The juvenile is similar in appearance, though the beak and eyes are gray.

The guira cuckoo is in the same family as the roadrunner, a local species.

The beak is thick and has a downward curve, designed for eating meat.

The guira cuckoo can be found across a range of open habitats, including scrub woodlands, mixed tree and scrub savannas, pampas, pastures and coastal dunes.

The population number of guira cuckoos is unknown, but increasing and considered common.

They will feed on insects, amphibians, small reptiles, and eggs and chicks of smaller species.

As a carnivorous species, the guira cuckoo controls the populations of the animals it consumes. 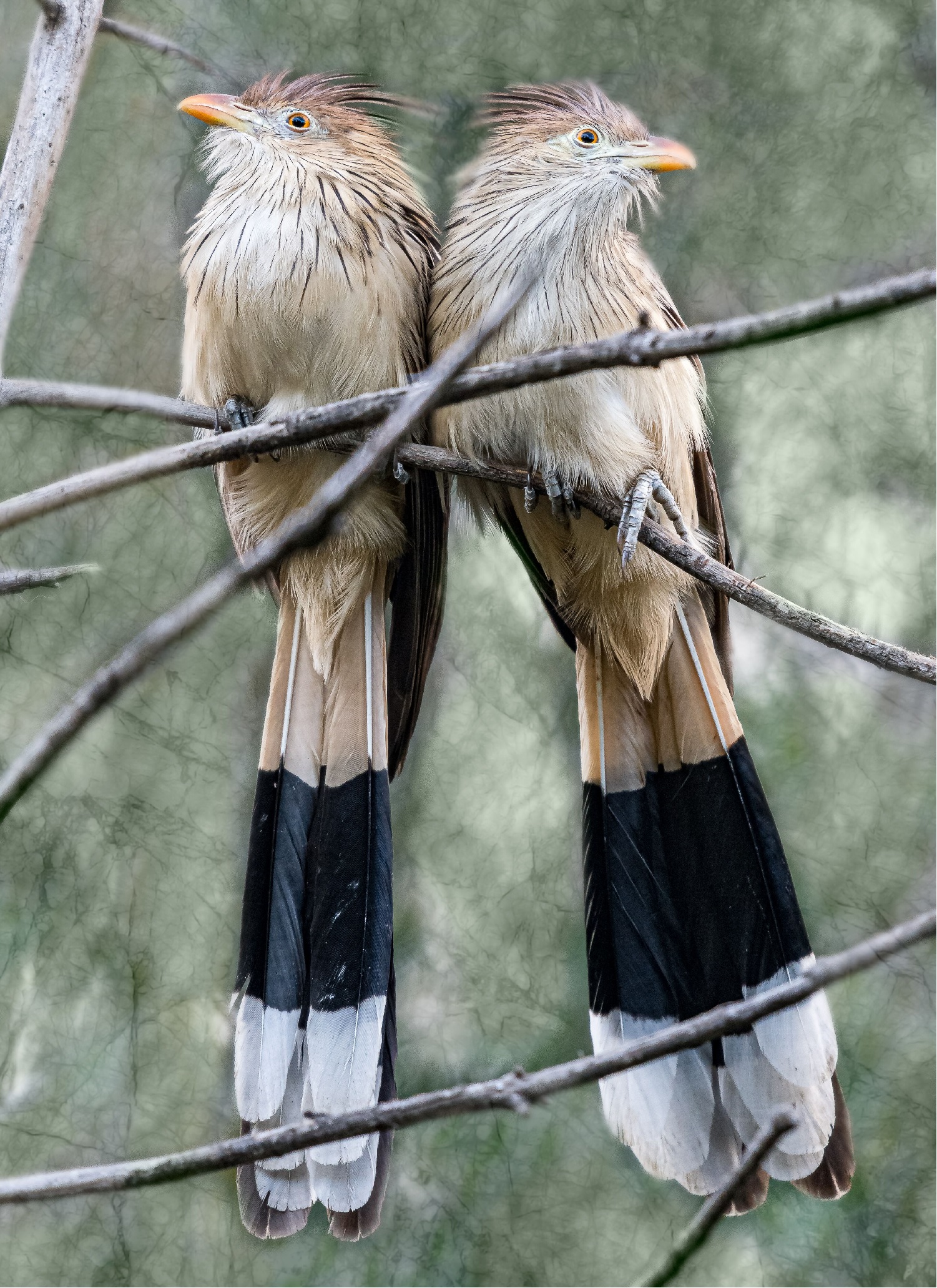 Guira cuckoos are active during the day. In the early morning or after rains, they often huddle with flock mates and sunbathe.

During the nesting period, one of the flock will stay at the tree while others forage. If a predator or non-flock member guira cuckoo approach, it will give an alarm call and the flock with defend the nest and chase off the intruder or intruders.

This gregarious bird lives in groups that average 6-8 individuals, though flocks of up to 20 have been reported. Flock mates will allopreen (preen each other) and often perch in close contact with each other.

The breeding season is variable, and can start as early as May and last through August. More commonly, it occurs during the rainy season, from August to November. Courtship occurs on the ground, with the male dancing around the female with wings open, crest raised, tail raised and feathers fanned out. Guira cuckoos are polyandrous (females mate with multiple males) and polygynous (males mate with multiple females), and communal breeders. Not all members of the flock end up breeding. Nests are large open cups made of sticks and lined with leaves. They are built high in thorny trees, and may be reused year to year. The guira cuckoo may breed several times throughout the season.

Females lay eggs in communal nests—as many as 20 eggs may be laid in a single nest, though individual females contribute 5-7 eggs on average. Eggs are variable in color, though often a sea green with white or light speckling. During the 12-15 days on incubation, there is intense competition between the adults to ensure the survival of their own offspring. If a female who has not laid any eggs yet finds eggs in the nest, she will toss them out before laying her own. Up to half the eggs laid may get tossed out of the nest. After chicks hatch, they stay in the nest for another 12-15 days before fledging. During the first week, hatchlings may be removed from the nest and sometimes killed by adult members of the flock. By 10 days old, chicks may leave the nest and move around the tree, and can climb back into the tree if they fall. Adults will continue to feed chicks for 3 weeks after fledging. The survival rate of nestlings from egg laying to fledging is well below 50%. 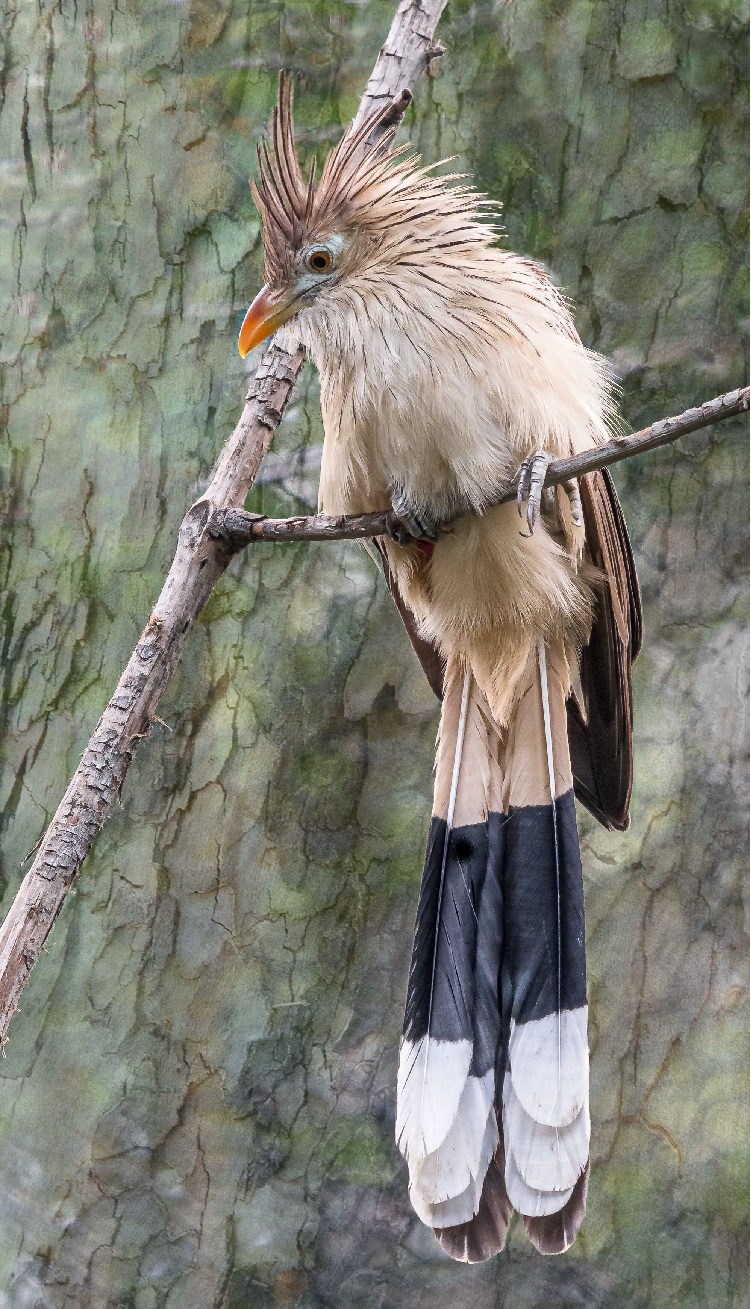 The guira cuckoo is listed as Least Concern on the IUCN redlist, and is not listed on the CITES appendices. Since they are considered increasing and common, there is no plan in place for conservation. They tend to benefit from human disturbance of the landscape, especially clear-cutting rainforest, as it opens up more habitat for them.

Not much is known on the guira cuckoo historical data. Their range has expanded from historical range, and their population is increasing.

The greatest threat to the guira cuckoo is pollution of their habitats.

Always make sure to leave an area cleaner than you found it! Pick up and properly dispose of waste. Since the guira cuckoo often lives around people, it can be negatively affected by our trash. 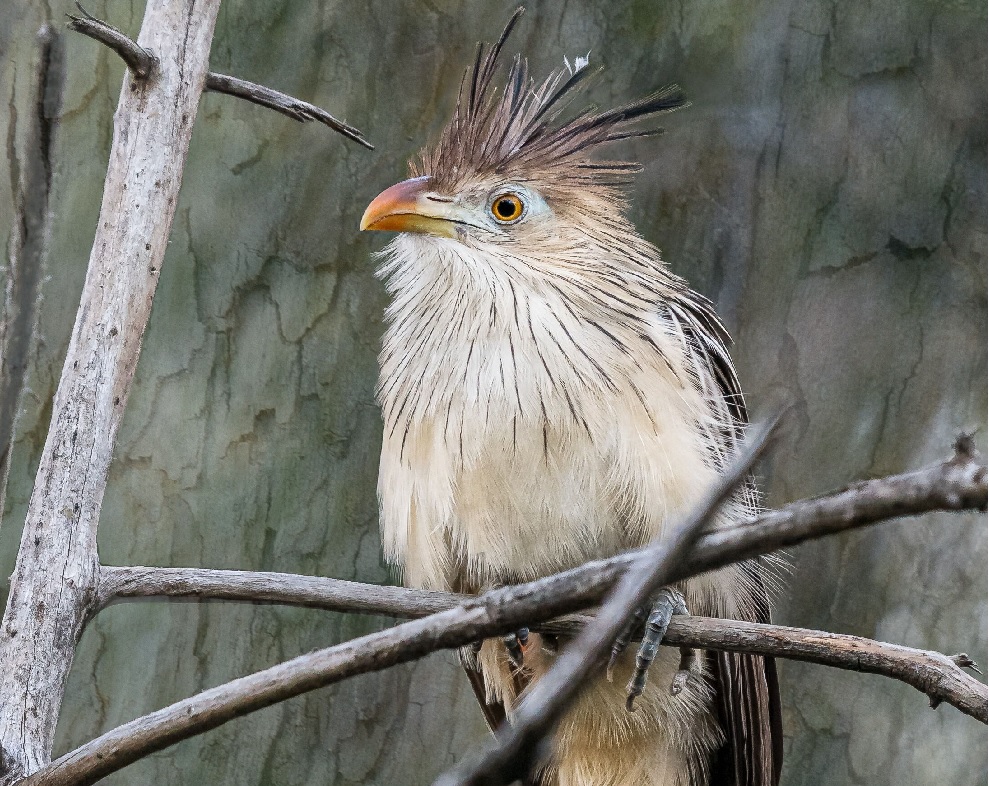 The guira cuckoo is a noisy bird, and can make a variety of calls. One of the most distinctive calls is a series of descending notes “pio-pio pio-pio-pirrrrrrrrr,” but they can also make yodels, guttural calls, gargled trills and whistles.

Many cuckoo species are brood parasites, laying their eggs in the nests of other species of birds. The guira cuckoo, however, is a communal or cooperative breeder and lays eggs in a communal nest with other guira cuckoos in their flock. Parental duties are spread amongst all the breeding adults since parentage of chicks is unknown in a communal nest.

The guira cuckoo is in the subfamily Crotophaginae, along with 3 other species of birds, all of which give off a strong odor.

Guira cuckoos are not strong fliers. They hop and make short glides most of the time.