Rainforest of northern mainland Madagascar and the island of Nosy Be. 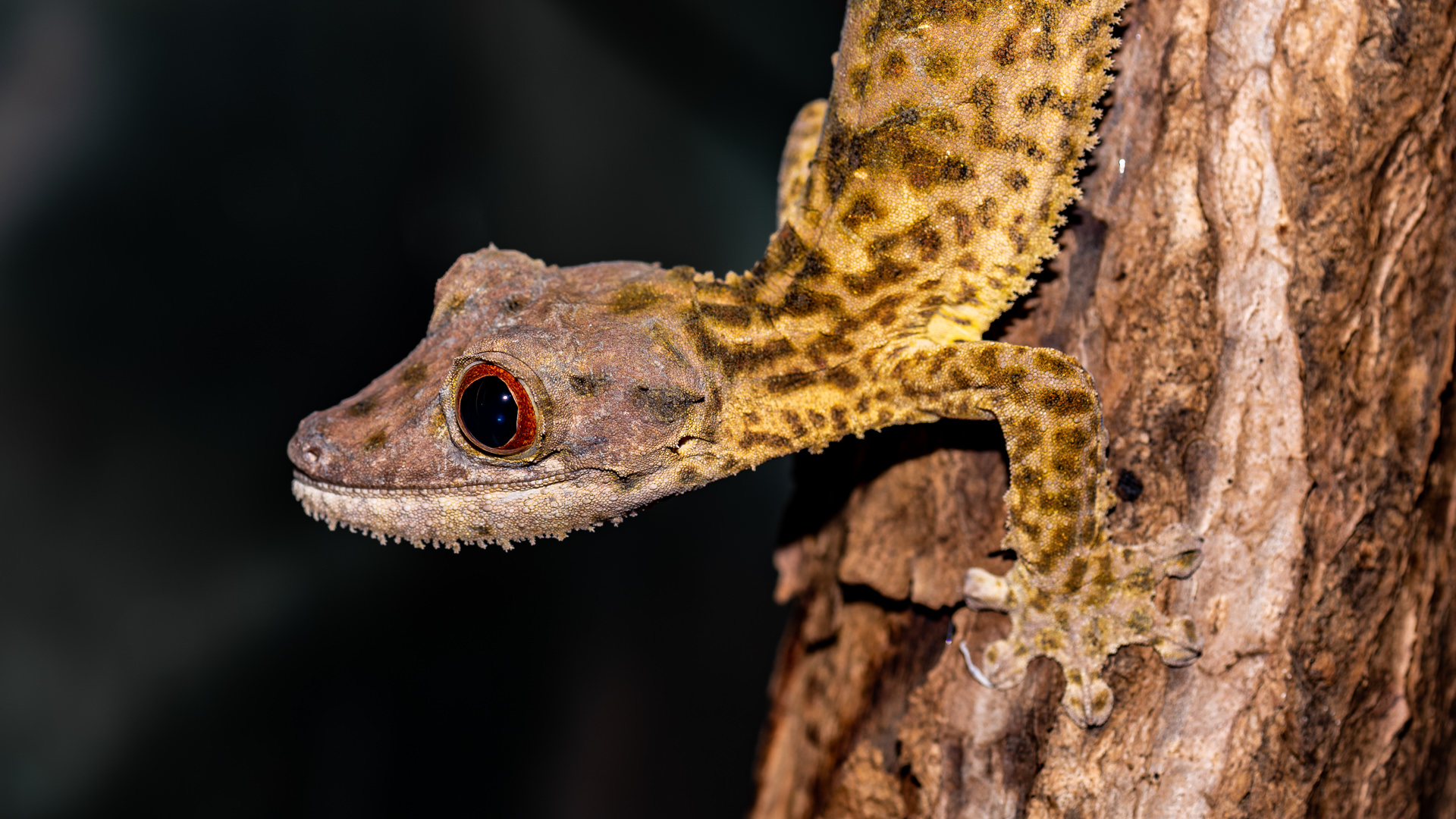 This gecko's coloring is variable; many have a beige or grey background with black cross-banding. The anterior side is usually a whitish color. This gecko has a large triangular head, prominent eyes with a polka-dot appearance, and vertically-oriented pupils. Possessing flaps of skin around the edges of the head and body, long slender limbs, and a long, broad, flat tail shaped like a leaf!

To aid in camouflage, they exhibit an overall backdrop of brown with spots, speckles or swirls of varying color. A very spiky tail used to swipe at predators, paired with on open mouth hissing, are there first line of defense. As a result of high concentrations of salt bearing plants, this species has glands in its nostrils used for eliminating extra salt without eliminating water. Can you tell in the picture below which is the Common Chuckwalla and which is the Mali Spiny Lizard (hint: look at the tails)?

Rainforest of northern mainland Madagascar and the island of Nosy Be.

Carnivorous. Insects and other small invertebrates.

Nocturnal and arboreal. They do not venture high up into the trees or down to the ground.These geckos spend much of their lives in the trees, typically hanging with their heads pointed downward. They descend from the trees only to lay eggs in the leaf litter on the forest floor. Due to tiny pads on the gecko's feet that create a strong adhesive effect, they can cling and climb on a variety of surfaces.

The gecko will lick its eye to clean it from dust and other particles.

Two eggs are laid by the female and hatching occurs in 85-95 days. Three clutches may be laid per year. Little is known about how they reproduce, but it is believed that they lay between 2-4 eggs, and that the female does not care for the young after they hatch.

Precocial. The female does not care for the young after they hatch.

CITES is not currently protecting the genus, but at the current rate of deforestation the genus will soon be threatened. This species of Uroplatus are not endangered, but due to the cutting down of the rainforest, many of the species are found in undisturbed parts of Madagascar. Listed by as Vulnerable by IUCN.

Henkel's Leaf-Tailed Geckos get their name from their broad, flat tail that looks very leaf-like.

The Henkel's Leaf-Tailed Gecko is one of the most unique geckos in the entire genus. The genus contains 9 species in total: U. henkeli, U. malahelo, U. lineatus, U. sikorae, U. fimbriatus, U. alluaudi, U. guentheri, U. ebenaui, U. phantasticus.

All of the leaf-tailed geckos are camouflage specialists. Some have beards, others have patterns that mimic tree bark or moss, while this one has a tail that looks like a dead leaf. Satanic leaf-tailed geckos have horns above their eyes that break up the silhouette of their bodies and make them harder for predators to find.

Nearly two-thirds of gecko species, including this one, have adhesive pads on their fingers and toes.

Small, flat scales create a soft, silken appearance. When shedding skin, many geckos tear it from toes and tail with their mouths. Loose skin is a defense against predators.

Like most lizard species, geckos can shed their tails when attacked. If the predator focuses on the tail, the gecko can escape. A re-grown tail, supported by cartilage, not bone, is often shorter and patterned differently from the original.