Spain, France, and Italy along Mediterranean Coast and into the Balkans 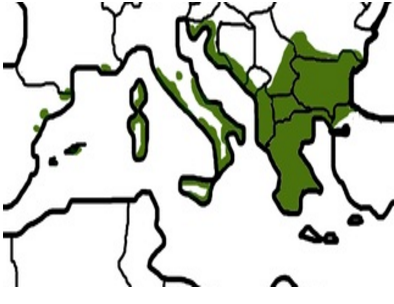 Hermann’s Tortoises are small to medium sized tortoises roughly 6-9 inches in length, and 5 inches tall. This rugged tortoise ranges in color from dull grey to a dark green with various shades of tan and brown blended into the carapace, which has a low dome and small ridges between scales

Both sexes have an elongated tail which tapers to a terminal scale which is modified into a thorny spike.

Both sexes have an elongated tail with a modified terminal scale spike which tapers to a point, the tail and spike are more elongated and pronounced in male tortoises. This spike aids in male combat, being used as a kick stand the tail will help tortoises stay upright and avoid flipping over. If the unfortunate event occurs and a tortoise does flip over, the tail may often give enough push to flip the tortoise back over onto its feet. Physiological: Through means not quite yet known to science, Hermann’s Tortoises rely primarily on olfactory ques from hormonal signals called pheromones. Information about location, food source and mate choice are communicated via pheromones. 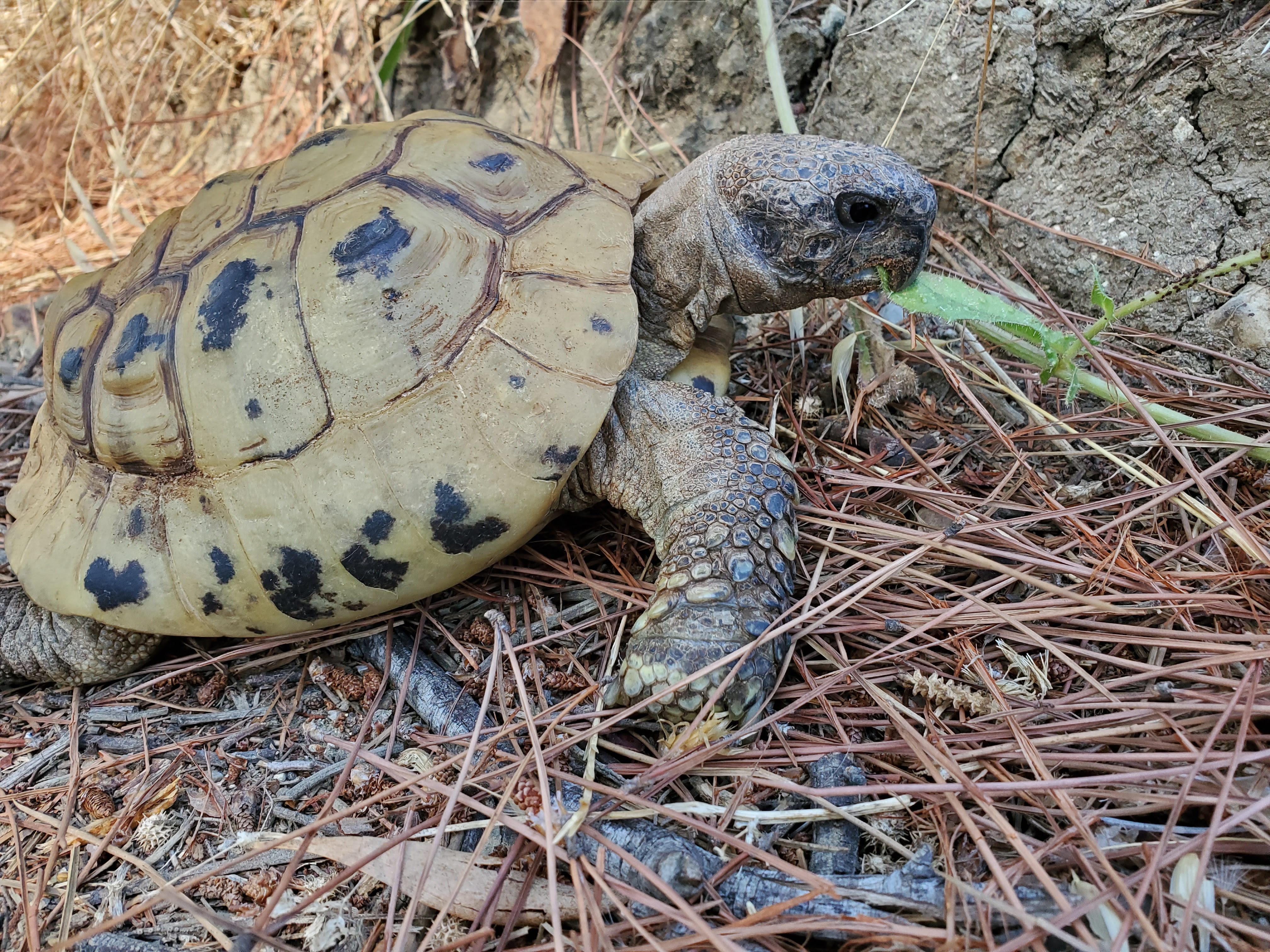 The wild diet consists of vegetation including dandelion, honeysuckle, clover, and a variety of herbs and root vegetables. They will also eat flowers and berries native to the Mediterranean; these tortoises are strictly herbivorous and will not consume insects or meat.

Much like the Desert Tortoise of the American South West, the Hermann’s Tortoise is an adept burrower capable of making its own shallow burrows below the ground. Although less impressive than the Desert Tortoise burrow network, other animals will utilize their burrows for shelter. Despite their abilities to dig burrows, Hermann’s Tortoises prefer a fallen log or patch of brush and leaves to seek shelter, saving burrows for summer and winter hibernation. Rats, badgers, foxes, boar and many species of bird

Entering a period of dormancy in the winter months from November to February these tortoises submerge themselves in loose soil and leaf litter beneath fallen logs or rocks. Again, tortoises may go dormant in the warm summer months to escape high temperatures from June to August. During other months of the year, Tortoises will spend cool nights in shallow burrows, emerging in the day time to bask and forage.

Like other tortoises and turtles, Hermann’s tortoise will draw its legs and head into its shell for protection, providing some degree of safety from predation. Basking behavior is also observed when temperatures are suitable. The use of their tail in reproductive combat is unique to Hermann’s tortoises.

Immediately following winter hibernation, Hermann’s Tortoises emerge from their burrows and begin mating behavior. Males will ram, bite and attempt to flip one another onto their backs in competition for mating dominance. Although males will compete for breeding privileges, males also make grunting sounds which are selected for by females. It is not uncommon to find hibernacula comprising of 3 or more Hermann’s Tortoises during months of inactivity leading to the conclusion that this species is somewhat socially tolerant.

Males will compete with other males for rights to mate with females from February until mid-April. Females will dig shallow burrows for which to lay her eggs, typically 12 eggs per nest are laid throughout May.

An average of 12 eggs are laid in which the survival rate is just over 50%. Young are born precocial and are vulnerable due to soft, under developed shells.

Listed as Near Threatened by the ICUN, Hermann’s Tortoises are in significant decline due to server habitat loss throughout most of its range.

Historical records place Hermann’s Tortoises occupying Southern Europe along the Mediterranean coast into the Balkans and Turkey. Over the last decade, their range has been reduced due to wildfire and expanding suburban communities.

Habitat loss is attributed to human growth, especially into rural areas with the emergence of agricultural practices utilizing pesticides and fertilizers. Hermann’s Tortoises have also been a target of the pet trade industry, many tortoises have been taken from the wild for breeding purposes to support domestic tortoise trading.

Oakland Zoo is home to one Hermann’s Tortoise named Zaba. He has been with the Zoo since the 1960s! Zaba is part of our education animal team and is used on programs to help educate the community on proper animal care.

Always remember to leave wild animals alone! Do not take an animal from the wild to have as your pet and always research where your pets come from so as to avoid negatively impacting the wild population.

Like most tortoises, a Hermann’s Tortoise is capable of living up to 90 years in human care, meaning if you bought a pet tortoise as a child, it may live to be older than you!