Native to eastern Africa, found in the countries of Kenya, Tanzania, Ethiopia, Sudan, Somalia, Niger, Egypt and Lybia. They are found only in lower altitudes. 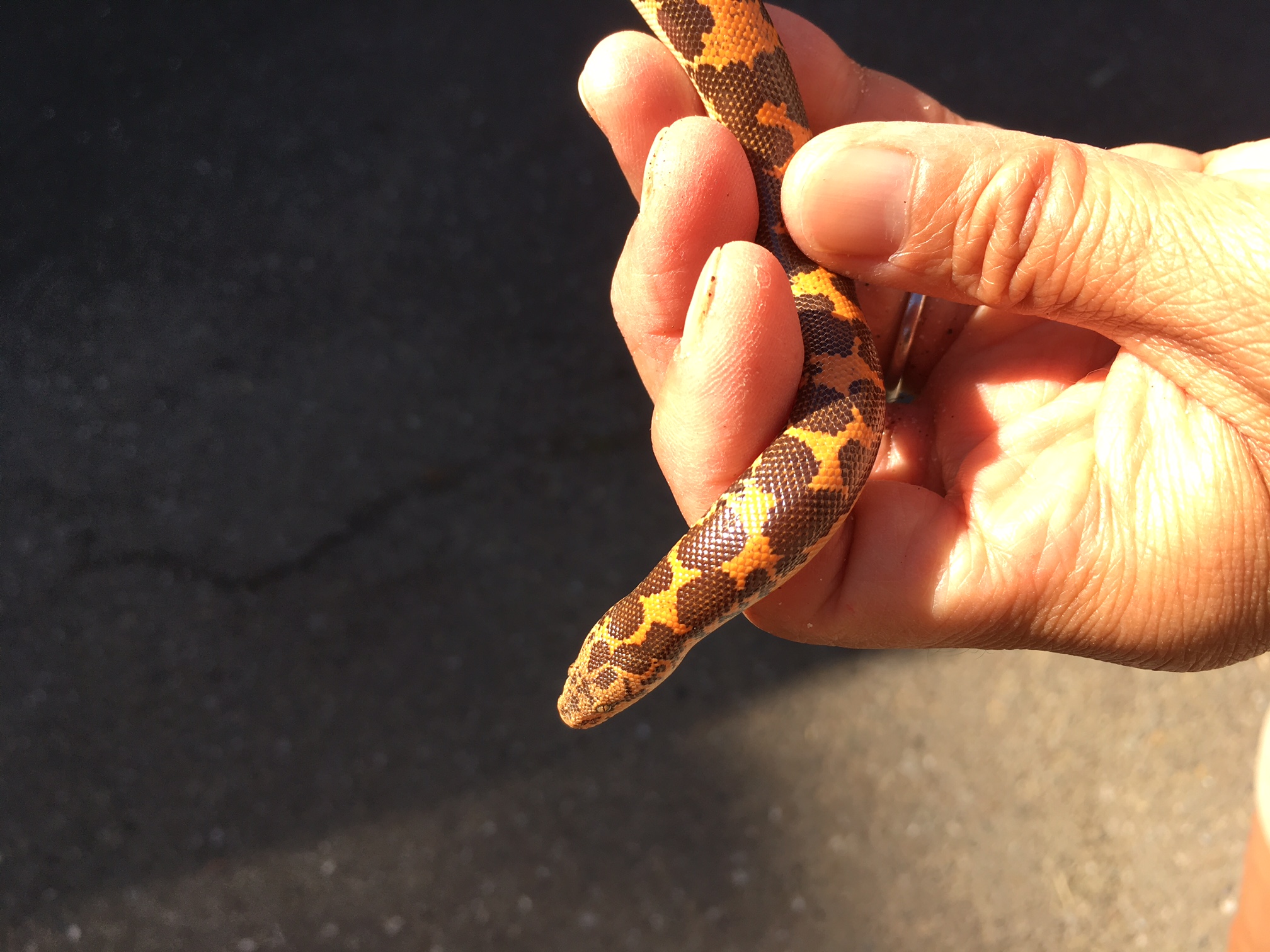 Kenyan sand boas are heavy-bodied stout snakes with a blunt head, small eyes, and a thick, short body and tail. Females are larger, reaching length between 26 and 32 inches, while males grow to about 15 inches. The belly is pale white or cream colored , and the back is yellow or orange with splotches ranging in color from medium brown to dark black. The tail is very short and tapers quickly to a dull point and can’t be coiled. The eyes are yellow, with a slitted pupil and the nostrils are located on the top of the head. The boa’s eyes and nostrils are placed on the head so that they remain free of debris when the snake’s body is hidden below the sand.

The Kenyan sand boa is a subspecies of the Sand boa, and the full scientific name is G. colubrinus loveridgei, and is found primarily in eastern part of its range, in Kenya. The nominate subspecies, G. colubrinus colubrinus, is found in Egypt.

The Kenyan sand boa’s nostrils and eyes are placed high on the head so that they can remain free of debris while they are burrowed in the sand. Extremely small scales to protect their skin from fine sand granules. The ability to burrow quite rapidly keeps them safe from predators.

Kenyan sand boas are found in loose, sandy soil in semi-desert and desert margins, vegetated sand dunes, and arid scrubland. The species has been recorded from sea level to 1,500 meters. They are only found in low altitude areas, that has loose surface sand.

In Egypt, it is known as uncommon and localized. Otherwise, not enough information is known on the home range, population density or numbers of the Kenyan sand boa.

Kenyan sand boas primarily eat rodents, but have also been known to prey on lizards and birds.

Snakes play an important role as both prey and predator in ecosystems all over the world. As a predator, the Kenyan sand boa helps keep its prey populations under control. Many of its prey items are considered pests to humans. They can be very important in regulating the populations of pest species such as rodents which are common around human activity.

The Kenyan sand boa spends most of its time buried in sand or loose soil, or hiding in burrows. It is active at night, and will ambush prey and pull it under the sand where they use constriction until the prey is dead.

A rather docile snake, the Kenyan sand boa retreats beneath the sand when threatened rather than striking.

These snakes are solitary and independent from birth.

Mating season is during the spring and early summer, and oftentimes males will have to dig the female out of the sand or soil before mating can take place.

4-20 young are born per clutch. They are 8-10 inches long and precocial, meaning independent from birth.

While this species is not listed on the internation IUCN redlist, it is placed on the IUCN Mediterranean Red List as Least Concern. It is also on CITES Appendix II.

Fossilized remains of sand boas have been found in rocks that date 50 million years old!

While Kenyan sand boas are listed on the IUCN Mediterranean Red List as Least Concern, the biggest threats facing them are habitat loss and collection for the pet trade.

Our Kenyan sand boas are part of the education collection, and serve as ambassadors for their species.

If you are interested in getting a Kenyan sand boa, or any snake, as a pet, please make sure that it was born in captivity so as not to support an illegal pet trade.

Kenyan sand boas have “leg” spurs near their vent, which are vestigial legs. Males have longer spurs than females.

This species of snake is ovoviviparous, meaning that the female incubates her young internally in membranous sacs. After a gestation period, the gives birth to live young.

Kenyan sand boas are in the Boidae family, which represents 40 species of snakes. Sand boas are among the smallest of the family.