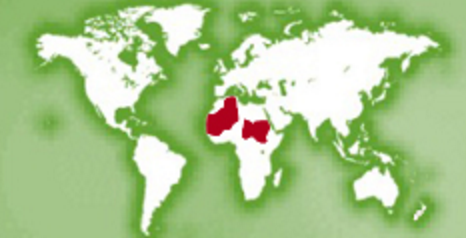 Uromastyx inhabit a range stretching through most of North Africa, the Middle East and across south-central Asia and into India. This area spreads across 5000 miles and 30 countries. They are commonly known as a spiny-tailed lizard, uros or Dabb lizards. Just as the name implies this lizards tail is covered in spiny scales which can be used for self-defense. This species is found in Mali, Africa.

There are approximately 15 different species in the genus Uromastyx, some have been moved to Genus Saara.

To aid in camouflage, they exhibit an overall backdrop of brown with spots, speckles or swirls of varying color. A very spiky tail used to swipe at predators, paired with on open mouth hissing, are there first line of defense. As a result of high concentrations of salt bearing plants, this species has glands in its nostrils used for eliminating extra salt without eliminating water. Can you tell in the picture below which is the Common Chuckwalla and which is the Mali Spiny Lizard (hint: look at the tails)? 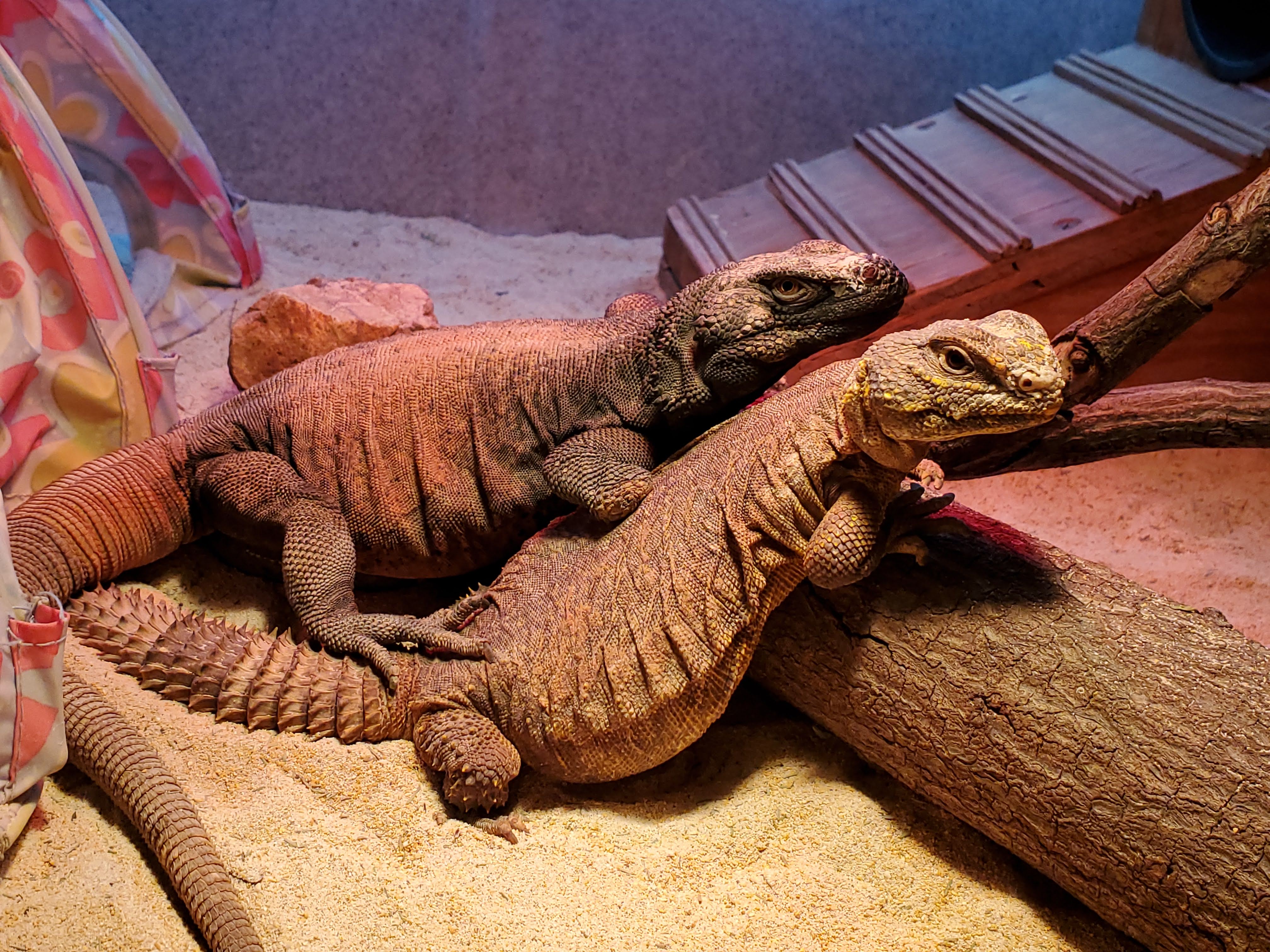 Approximately 10 to 100 individuals can live in one area that covers 2 square miles.

Herbivorous; as a juvenile consumes invertebrates.

Mostly herbivorous, uromastyx do consume invertebrates in juvenile stages of life. This species is prey to may birds, snakes, wolves and monitor lizards thus being a very important food source in a sparse dessert habitat. Although solitary in the wild our Mali Uromastyx (right) lives with her best friend, a common chuckwalla (left), in our zoo's education department. See them sleeping together pictured below. They make a great ambassador team. Despite originating from opposite sides of the world both Mali Uromastyx and chuckwallas share an herbivorous diet, and a dry, rocky desert habitat type. 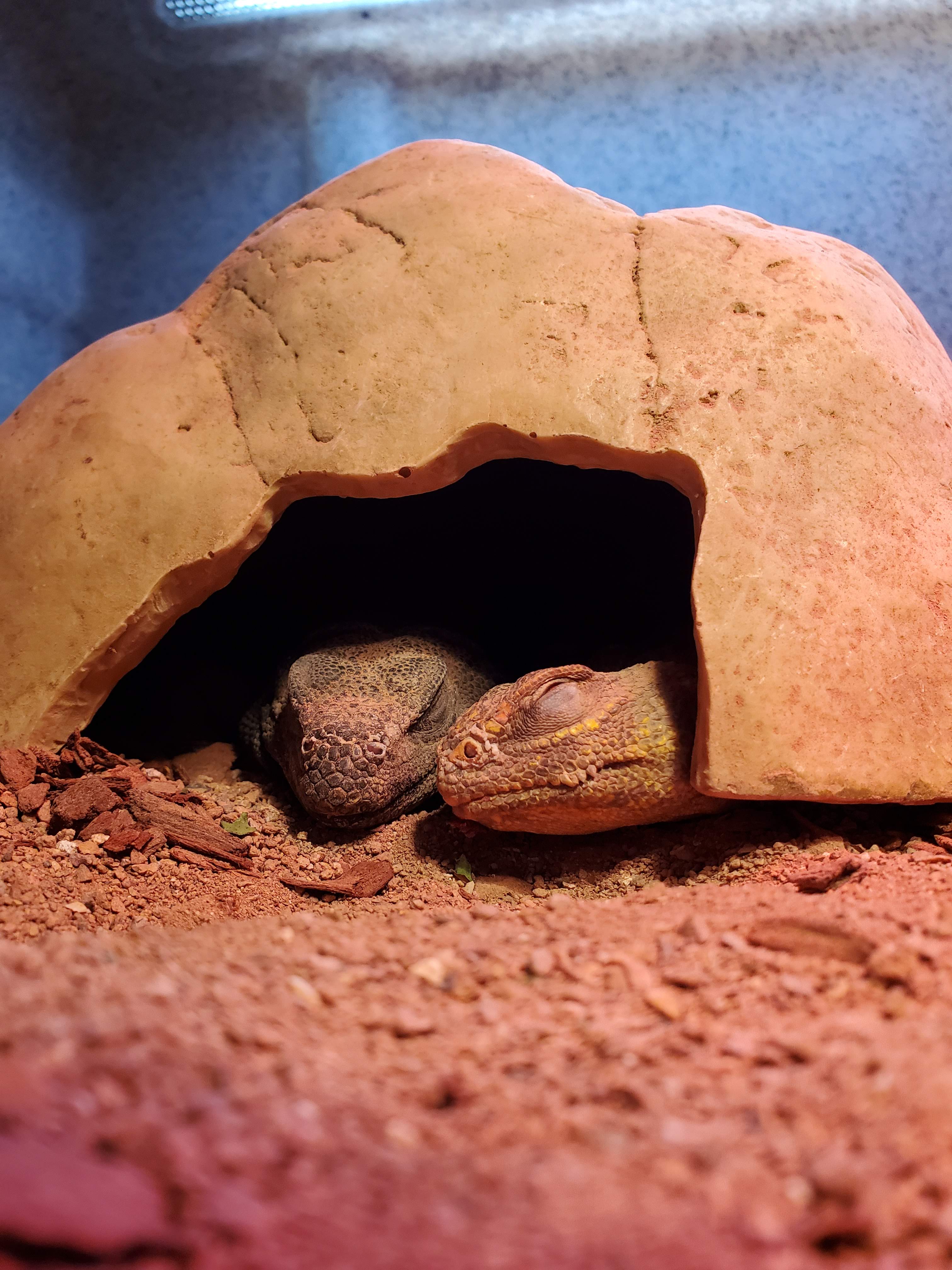 As a diurnal species this lizard is often found basking outside it’s burrow. Some species of Uromastyx will hibernate during the winter for up to 5 months, and will aestivate during summer months when there are drought-like conditions.

Using burrows and rocky cover to thermoregulate is key to surviving in such extreme conditions.

This species is highly territorial and will aggressively defend burrows, even hatchlings will attack one another.

Breeding season happens once a year around April, egg laying usually happens one month after. A male will court a female with a series of head movements and push-up motions. Females do guard the burrow in which she has laid her eggs.

6-23 offspring will often stay in their mothers burrow for a few weeks to a few months, while mother is keeping guard.

Currently only regulated by CITIES, and are listed in Appendix II as least concern. They are not evaluated by IUCN.

This species is often misidentified, which makes regulation very difficult. These animals have been trapped for food and medicines, which then led to pet trade.

Agriculture affects them, human/animal conflict and road mortality is high due to basking opportunities.

Make good pet choices and always find out where your potential pets come from and what do they need to be healthy.

The Leopard Gecko gets its name from the large African Cat who, like the Gecko has a spotted pattern which helps it to hide in its habitat!

· To aid in thermoregulation uromastyx can adjust scale color. When it is cool weather, scales will dull and darken, in warmer weather the scales lighten.

Thorogood and Whimster, 1979. "The Maintenance and Breeding of the Leopard Gecko as a Laboratory Animal" in International Zoo Yearbook: Reptiles, Vol. 19, pp. 74-78.