North and Central America. Found across the entire continental United States and Mexico, most of Canada and southern inland Alaska, and in Central America along the Pacific Coast and in the drier, more arid regions. Found on all Caribbean Islands all the way east to the British and US Virgin Islands. Absent from most of the northern coastal regions of Canada. 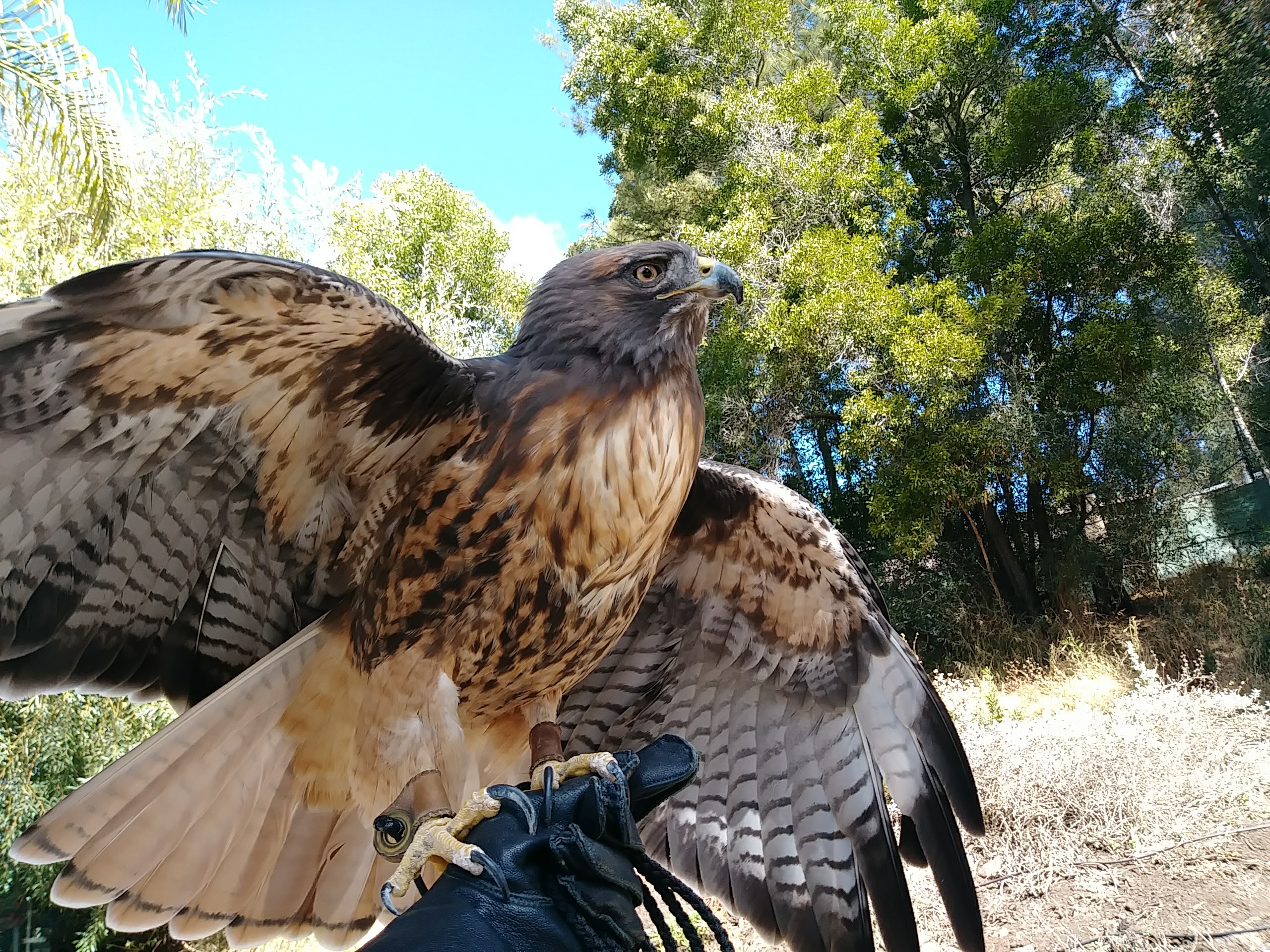 The Red-tailed Hawk is a large hawk with broad wings. They can easily be identified by brick red tail feathers that give this bird its name. The rest of their plumage varies greatly, though generally the back and wings are darker than the rest of the body, ranging from a light auburn to a dark brown. The breast and underbelly can range from a dark brown to a light buff color, with streaking on the belly, and the wings have a variable sized dark bar on the underside. The cere, foot and leg are bright yellow. The beak is short and hooked. Females are about 25% larger than males. Immature birds have lighter eyes and grayer tails and heavily streaked plumage.

There are at least 14 known subspecies of the Red-tailed Hawk, and as many as 16 depending on the source. They are differentiated based on color morph and where they breed and spend the winter. The lighter morph makes up almost all of the Red-tailed Hawks in eastern North America, while in the west there is much more variation.

Red-tailed Hawks have a sharply hooked beak and strong, curved talons. These act like the hawk’s knife and fork. When hunting, the Red-tailed Hawk will use its talons to catch, subdue, and kill their prey. Then they hold their prey against a perch with their talons and use their beak to tear off pieces of meat. The relaxed Red-tailed Hawk foot and talon is closed. To open their talons to catch food or during courtship flights, they must consciously open their feet. The trigger to close the talons is when the pads on their feet touch either a perch or food, and then the foot snaps closed. This drives the talons into their prey with enough force to kill, or helps them land stably. Red-tailed Hawks have a grip strength of about 200 pounds per square inch (psi)! 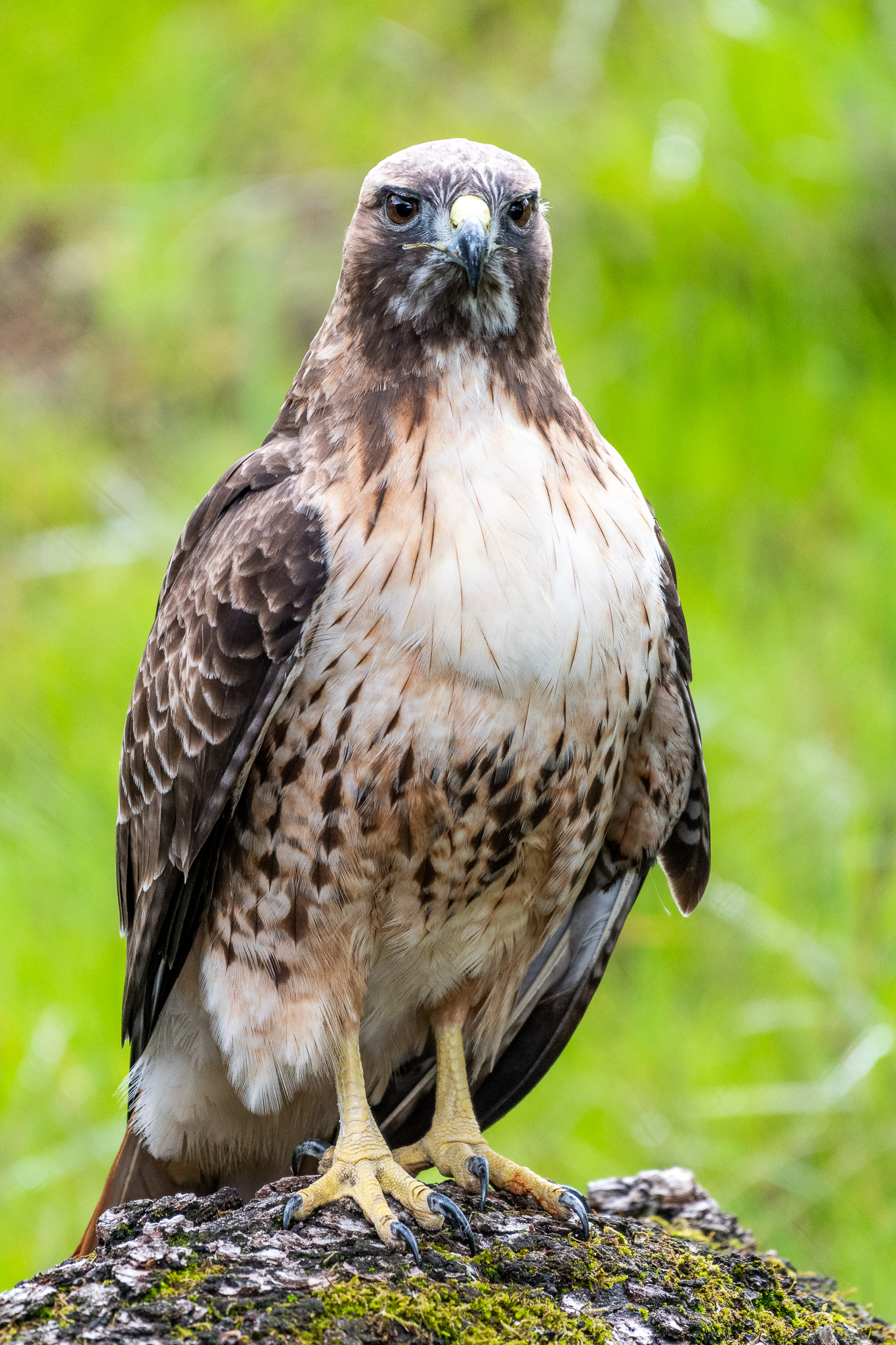 The Red-tailed Hawk inhabits a wide range of habitats and altitudes. They can be found in scrub lands, arid deserts, mountain grasslands and prairies, open coniferous and deciduous woodlands, pastures and agricultural fields, urban areas and tropical rainforests. They prefer open areas and will nest at edges of woodlands.

The home range of a Red-tailed Hawk pair can vary greatly in size, from 0.85 square km to 5.2 square kilometers. The size depends on the habitat, food availability, the season, and number of perches and possible nest sites. Typically the larger territories are found in areas with scarcer resources, and smaller territories are resource-rich. The breeding density (pairs/sq. km.) of Red-tailed Hawks ranges from 0.03 (in Utah) to 0.78 (in California).

Preys primarily on small mammals, such as rodents, rabbits and opossums. They will also eat reptiles and other birds.

Red-tailed Hawks play an important role in keeping the population of rodents and other small mammals in check. Up to 85% of their diet is made up of small mammals. They have an antagonistic relationship with many species of small birds that may ‘mob’ them during nesting season. Their nests may provide homes for songbirds. 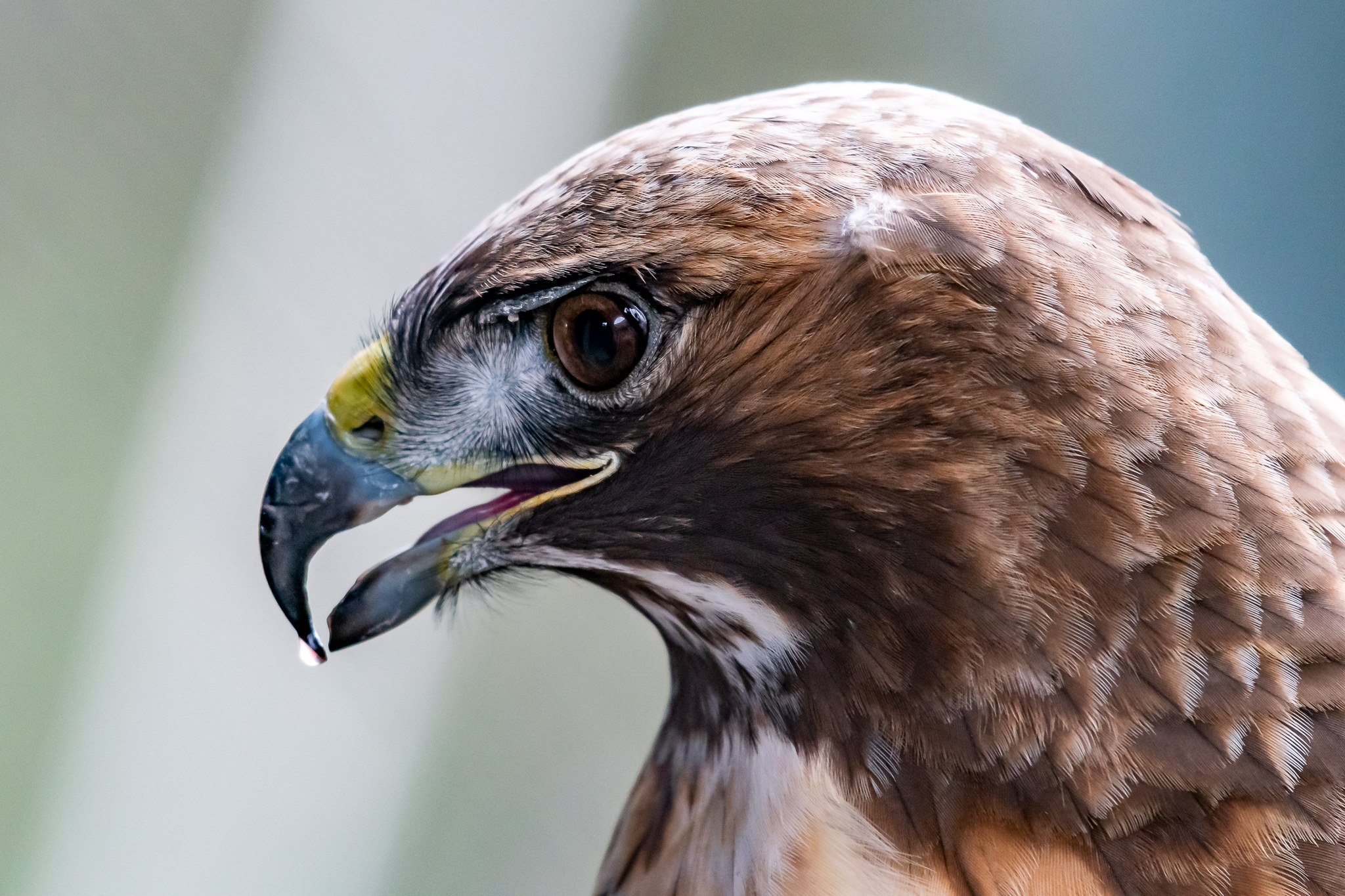 Red-tailed Hawks are opportunistic hunters, and will hunt any time of the day. They also spend the day defending their territory, soaring and flying perch to perch. During breeding season, more time might be spent in making or repairing a nest and defending the territory.

Red-tailed Hawks adapt their hunting strategy to their prey. They may fly up behind the animal using trees or bushes as a cover, or perch on a nearby branch and appearing disinterested until the prey’s attention is distracted, at which point they attack. Aside from using perches, Red-tailed Hawks also hunt while flying, diving down quickly on their prey, and mated pairs may even hunt together. The feathers of a Red-tailed Hawk are for more than just flight and warmth—they use them in addition with posture to communicate with each other. Aggressive posturing is displayed by a raised head and feathers standing upright to make them appear larger. A submissive posture is displayed by lowering the head and keeping the feathers sleek to the body.

Red-tailed Hawks are considered monogamous, with pairs bonded until one dies. Breeding season begins in the spring, and a bonded pair will begin courtship by soaring together in circles. During these courtship flights, which last 10 minutes or more, they will chase and swoop after each other, sometimes locking talons while swooping. Mating usually occurs after the courtship flight. Males and females will build and repair nests together prior to breeding season, sometimes using the same nest year after year. Nests are usually at the crown of a tall tree, of if there are no trees, on a cliff ledge. In urban settings, they will nest on window ledges of tall buildings and billboard platforms. The nest can be as tall and wide as 3 feet, constructed from sticks and twigs, lined with bark, stalks, and other plant material.

The female Red-tailed Hawk lays between 1 and 5 eggs every other day starting in March or April. Eggs are 5.5-6.8 cm long, and white or buff colored with light brown speckles or blotches. Chicks hatch after 28-35 days, featherless and completely dependent on adults (altricial). Chicks fledge after 42-48 days, but may remain with parents for up to 10 more weeks.

The Red-tailed Hawk is listed on the IUCN as Least Concern (2012) and on Appendix II on CITES. The total population is said to be increasing, and their geographic range expanded. They are not the target of any known conservations, however their total population is monitored on a yearly basis. Partners in Flight estimated their breeding population to be approximately 2.3 million. Red-tailed Hawks are also protected by the U.S. Migratory Bird Act.

Threats against the Red-tailed Hawk include illegal shooting, collisions with cars and windmills, electrocution, lead poisoning and contamination by pollution.

While the female spends most of the time on the nest once the chick have hatched, incubation duties are shared by both male and female. The male will feed the female while she is on the nest.

Have you ever heard an eagle scream in a movie? Well, that is actually the call of a Red-tailed Hawk! Their scream is used for almost all birds of prey, no matter what species.

Because of its extensive geographic range (just about all of North America!) and huge total population, the Red-tailed Hawk is thought to be the most common bird of prey in North America.

Red-tailed Hawks have excellent eyesight! They can see 8x better than a human, meaning that they can see a mouse from 100 feet (about 30 meters) away. They also have a ridge above the eye to shade their eyes from the sun

Red-tailed Hawks are both a year-round and a migrating bird. Birds in the northern range migrate south for breeding, while those that live in temperate areas are year-round residents.