Known by several names: Schmidt’s Guenon, Schmidt’s red-tailed monkey, black-cheeked white-nosed monkey, red-tailed guenon, they all refer to this small monkey with pronounced cheek pouched that are stuffed with food during foraging. They don a white or yellow nose against a blue-gray face, white cheek tufts and a long, red tail measuring up to 36 inches which measures twice their body length. The hair on the body varies from speckled brown and gray with a white chest and variations having black limbs. Females are on average 4-5 pounds, and males on average 8-10 pounds.

26 species of arboreal widely distributed African monkeys, characterized by bold markings or bright colors. Non-prehensile tails with a length longer than the combined head and body measurements, reaching up to 3 feet in length!

Foraging will take place to fill the cheek pouches that hold as much as the stomach, but eating is held off for safe, quiet secluded locations up in the trees without interruptions. 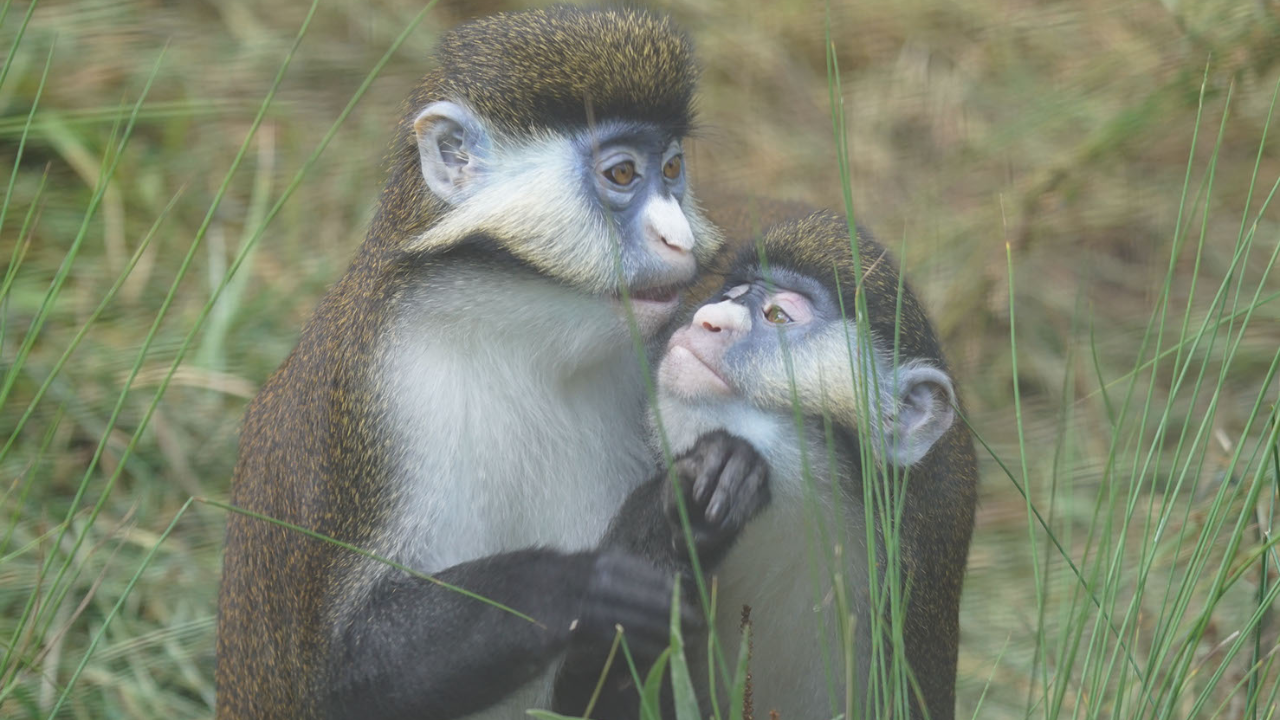 Their favored habitat is the middle canopy, but have been observed in swamp forest and other types of woodlands.

This old-world monkey finds its home range in central Africa; highest populations are said to be in Uganda. The reach of this species is wide, from the Central African Republic and parts of Democratic Republic of Congo eastwards through Kenya and down through Tanzania into Angola and Zambia.

Herbivores, this species are primarily fruit eaters. They also eat leaves, flowers, insects and gum or sap from trees.

Because they are avid fruit eaters, Guenons are considered seed dispersers, which strengthens the diversity and health of the ecosystem.

Diurnal, most active early morning, and late evening. Red-tailed monkeys are active and agile, spending most of their time high in trees.

Communications are important and complex within all primate groups, and this one is no exception. Vocalizations are specific and intentional: trills display submissiveness, chirps identify family members or to sound an alarm, and different types of growls, screams, and hacking calls are used during fights with other monkeys. They also have a special warning call for birds of prey, in which the adults will rapidly shout “ka” until the danger passes by. A red-tailed monkey looking to intimidate a rival will stare at his target, emphasizing his brightly colored eyelids by stretching it's facial skin, open his mouth without showing his teeth, and bob his head up and down. Family members greet each other by rubbing muzzles up against one another.

Groups are made up of a hierarchical, male-dominant group with multi-female members. Family groups can range in size from 10-30 individuals. This species has been observed interacting with other species including but not limited to blue monkeys and red colobus monkeys.

Gestation for these monkeys is five to six months, and they tend to give birth to a single baby. As with other guenon species, females are the primary care givers, though other females in the group may assist. Schmidt's red-tailed monkeys breed throughout the entire year.

The International Union for Conservation of Nature gives the Schmidt’s red-tailed monkey a Least Concern assessment (IUCN, 2018), saying the species exists in a wide variety of habitats and is able to withstand hunting pressure from humans. The species is only threatened on smaller scales, such as isolated forest patches and communities. The IUCN calls for more research on the red-tailed monkey and an update on their assessment. There is no reliable population estimate on the species, nor is there enough information to know if the population is stable or not. The lack of information on the species is mostly due to the difficulty of traversing their habitat, which is often in dense jungles and swamplands.

There are local threats as a result of habitat degradation, loss and fragmentation, and agricultural encroachment. The rapidly-growing human population in some parts of the range has led to habitat destruction related to farming, timber and fuelwood extraction, dam, road and powerline construction, mining, exotic tree plantations and human settlements.

Poaching and illegal use of forest products is common in areas of the Red-Tailed Monkey. There is an urgent need for improved protection, ideally involving local communities that can benefit from their efforts. Inadequate management and protection, rather than forest destruction, are the primary long-term threats, and conservation efforts must create new management priorities. Further survey work is also needed to determine current population numbers within protected areas.