Our tigers are 'generic,' meaning they are not identifiable as members of the Siberian, Bengal, Indochinese, Malayan, Sumatran or South China subspecies. These large cats have a reddish-orange coat with vertical black stripes. The underside of the limbs and belly, chest, throat and muzzle are white or lightly colored. Eyes are large, with excellent vision. Hearing is good, with well-developed ear flaps. They have large canine teeth, and strong powerful jaws. Paws are heavily padded; claws are retractable. Fur is short and thick. Whiskers (vibrissae) are long with thick, individual hairs.

There are currently 6 subspecies of tiger, each living in different habitats: Amur/Siberian tiger, Bengal/Indian tiger, Indochinese tiger, Malayan tiger, Sumatran tiger, South China tiger. The different subspecies are found in small areas of Asia, India and Russia. *Please note that our tigers are 'generic' and don't belong to any of these specific subspecies.

Camouflage: The tiger's striped coat helps them blend in well with the sunlight filtering through the treetops to the jungle floor. (In the forests where the tigers live, the light filters through the trees, creating a shadow. The pattern of the tiger's fur matches that shadow, allowing it to blend into its environment. This way, the tiger can sneak up on its prey without the prey spotting it.) The tiger's sense of hearing is so sharp that they are capable of hearing infrasound, which are sound waves below the range of normally audible sound (20 hertz.) Tigers have a special adaptation to their retinas, which allows more light to reflect back into their eyes, making it easier to see in the dark. Especially important, since they hunt at night! Large teeth and long, retractable claws, both of which help them to hunt. A tiger's large canine teeth and powerful jaws are used to grab a prey animal by the neck and suffocate it. Tigers use their sandpaper-rough tongues to scrape the last bits of meat from the bones of a meal. The spots on the back of their ears and their pattern of stripes may also be used in intraspecific communication. Tigers have tremendous leaping ability, being able to leap from 8-10 meters. Leaps of half that distance are more typical. Tigers are excellent swimmers and water doesn't usually act as a barrier to their movement. Tigers are also excellent climbers, using their retractable claws and powerful legs. Their stiff whiskers enable a tiger to move through thick cover at night. If the whiskers fit, the whole body can follow. 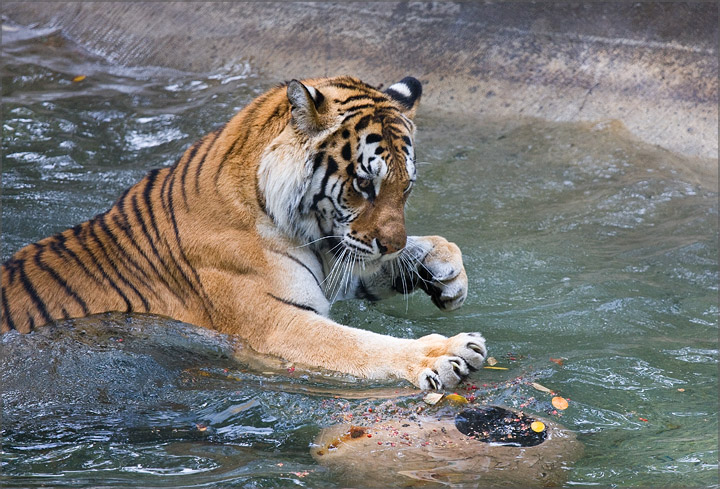 Tigers live in a wide variety of habitats, from tropical lowland evergreen forest, monsoonal forest, dry thorn forest, scrub oak and birch woodlands, tall grass jungles, and mangrove swamps. They are able to cope with a broad range of climactic variation, from warm moist areas, to areas of extreme snowfall where temperatures may be as low as -40 degrees Celsius. Some even seem to have special fondness for cover in old ruins.

Carnivore. Secondary consumer. Along with other major carnivores, tigers control the population of herbivores and preserve the grassland ecosystem. The interdependency of living forms in a food chain is obvious as the wild tiger is dependent upon herbivores for its survival, which in turn prevents the grasslands from being overgrazed. (Tigers help regulate populations of their large herbivore prey, which put pressure on plant communities. Because of their role as top predators, they may be considered keystone species.)

Most active at night.

Communication among tigers is maintained by scent markings, visual signals, and vocalization. Scent markings are deposited in the form of an odorous musky liquid that is mixed with urine and sprayed-on objects like grass, trees, or rocks. When threatened, tigers will pull the corners of their mouth open, exposing their canines, flattening their ears, and enlarging the pupils of their eyes. Tigers prefer to hunt in dense vegetation and along routes where they can move quietly. In snow, tigers select routes on frozen river beds, in paths made by ungulates, or anywhere else that has a reduced snow depth.

Tigers are solitary, the only long-term relationship is between a mother and her offspring.

Polygynandrous (promiscuous). Tigers are solitary and do not associate with mates except for mating. Local males may compete for access to females in estrus. Female tigers come into estrus every 3-9 weeks and are receptive for 3-6 days. They have a gestation period of about 103 days, after which they give birth to from 1-7 altricial cubs (average litter sizes are 2-3 cubs.)

Newborn cubs are blind and helpless. Their eyes do not open until 6-14 days after birth and their ears from 9-11 days after birth. The mother spends most of her time nursing the young during this vulnerable stage. Weaning occurs at 90-100 days old. 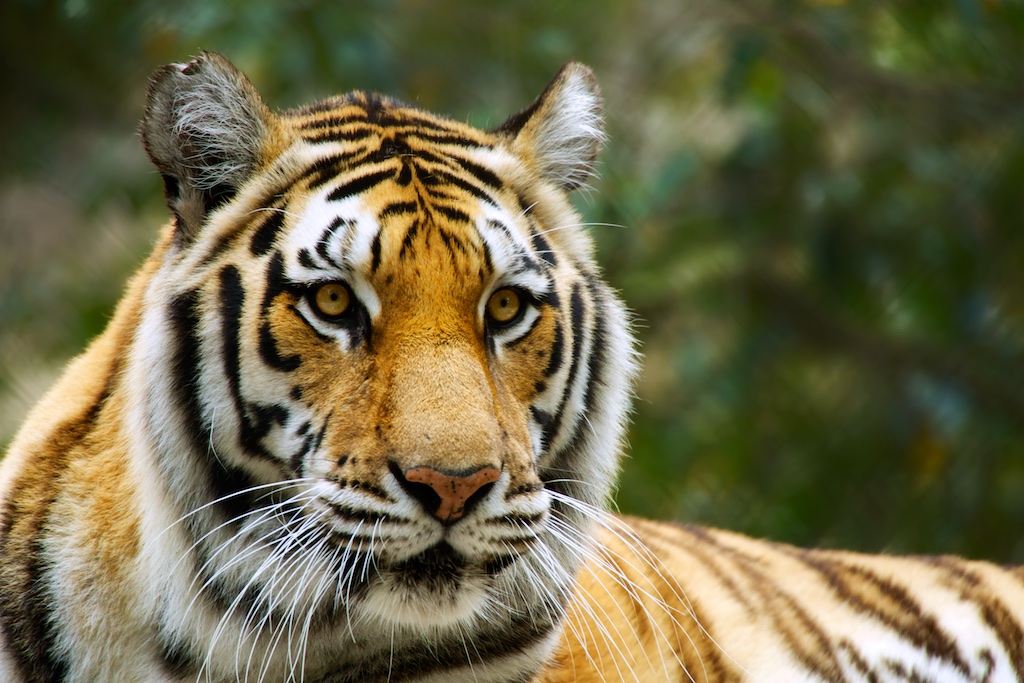 The range of tigers once extended across Asia from eastern Turkey and the Caspian Sea south of the Tibetan plateau eastward to Manchuria and the Sea of Okhostsk. Tigers were also found in northern Iran, Afghanistan, the Indus valley of Pakistan, Laos, Thailand, Vietnam, Cambodia, Malaysia, and the islands of Java and Bali. Tigers are now extinct or nearly extinct in most of these areas. (Populations remain relatively stable in northeastern China, Korea, Russia, and parts of India and the Himalayan region.) 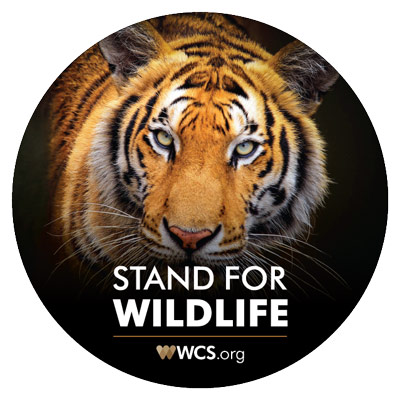 Tigers are seldom far from a water source; there are Bengal tigers that live in wet mangrove forests along the Ganges River in India. Excellent and powerful swimmers, tigers are often found during the day relaxing or waiting to ambush prey in ponds, streams and rivers. They seek out water to swim while most cats avoid it. Tigers even have partially webbed toes and aren't discouraged by a river if there is prey on the other side!

Tigers are the largest of the wild cats, larger than lions!

In June 2022, Oakland Zoo, in partnership with two globally accredited big cat sanctuaries, rescued four big cats from an abandoned roadside zoo in Oklahoma. We welcomed two tigers -- Lola and Mia -- from this rescue to Oakland Zoo, where we are providing forever homes for them.

After being cared for at our veterinary hospital, both tigers moved to the tiger habitat in early August, where they are beginning to explore their new home. Because these two tigers have been through such trauma in Oklahoma, we are being careful and cautious as they are introduced to a much larger habitat, so you may or may not be able to see them in these initial days -- look for signs at the tiger habitat for more information.