There is a variable band or patch of yellow feathers on the nape of the neck. Otherwise, the Yellow-naped Amazon is predominantly green; the head, breast and belly are a bright green, the wings and back a medium green. The outer four secondaries have bright red coloration. Feet are gray; beak is light gray, darker at the tip. Eyes are a reddish-orange. 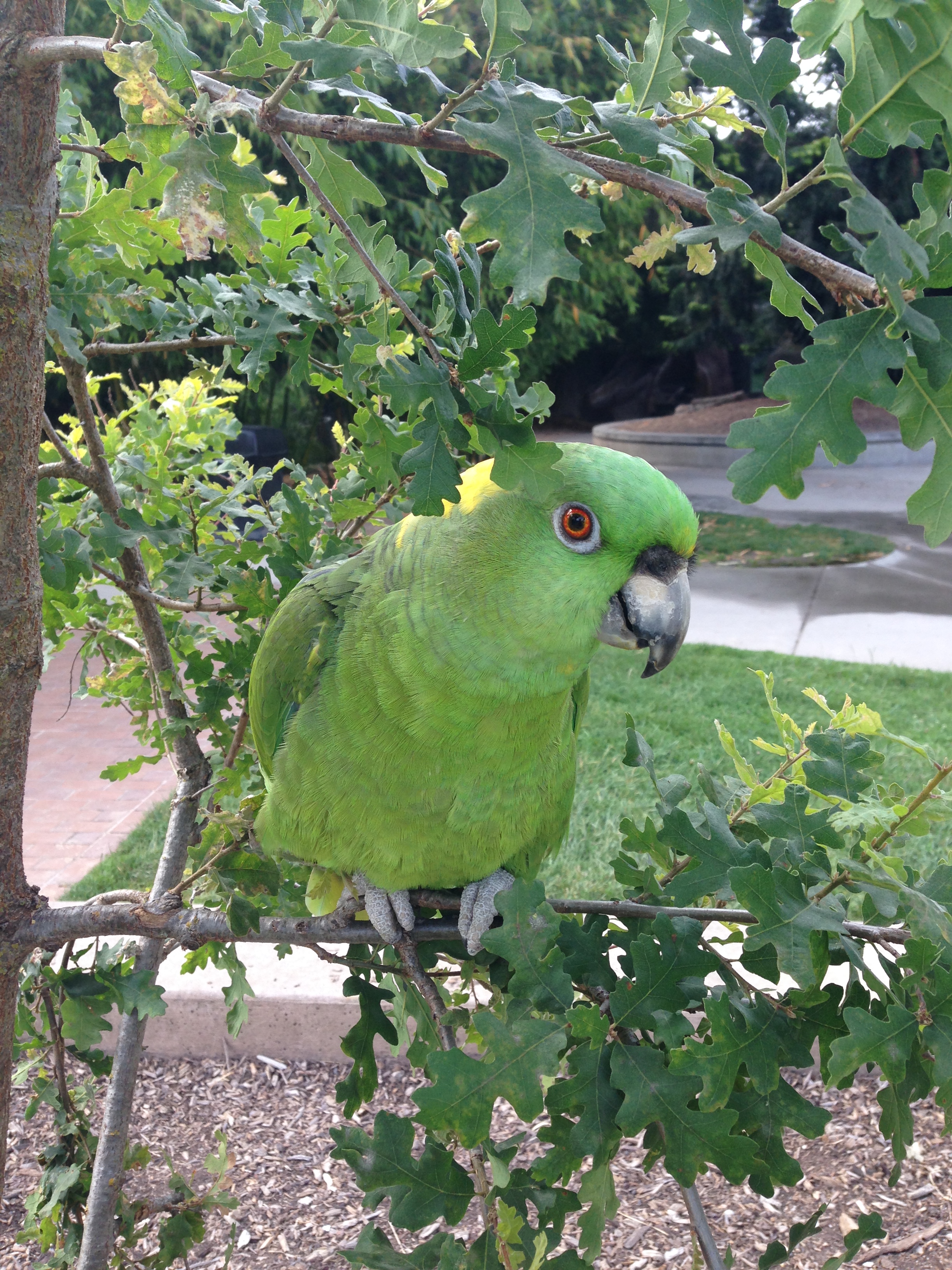 Both tropical and arid woodlands as well as tropical forests, clearings in forests, and areas of arid scrub land and savannah.

The total population of Yellow-naped Amazons is estimated at 50,000 or fewer, and the population is considered to be in rapid decline. According to studies done in 2007-2008 in Nicaragua, the population density is around 5.4 individuals per kilometer.

Parrots in general forage in groups in the morning, and take a nap mid-afternoon. They roost together in large groups at night.

Their call is a reiterated screeching. They also exhibit a variety of metallic shrieks and whistling calls. Pairs will perform duet calls.

Yellow-naped Amazons tend to be found in pairs or flocks. They will gather into larger flocks at communal roosting areas and feeding areas.

Once they reach maturity, Yellow-naped Amazons pair for life. The pair will often perform duet calls. They nest in natural tree cavities, in either living or dead trees. During the incubation and weaning period, the male feeds the female, regurgitating his food for her.

Currently listed as Vulnerable by IUCN and on Appendix I of CITES, there is thought to be between 20,000 and 50,000 total population of Yellow-naped Amazons left. The population in in decline in all countries of occurrence.

Anecdotal evidence from interviews with locals in south-western El Salvador indicate that the population has undergone a steep decline since the 1950s and 1960s. The overall population of Yellow-naped Amazons is reported to have declined by an estimated 50% between 1980 and 2000. In the 1990s, a population in Gracias a Dios, Honduras, was estimated at 123,000 birds, though nearly extirpated from other regions. Surveys from Nicaragua indicate that there has been a significant decline in the population between 1994 and 2004. In 2012, the IUCN bumped up their status from Least Concern to Vulnerable, and on CITES was updated from Appendix II to Appendix I in 2003.

The current threats to Yellow-naped Amazon Parrots are habitat loss and degradation and capture for illegal pet trade. Habitat loss is the main threat throughout the entire range, due mostly to expansion of agriculture. There is also a high demand for these parrots in the pet trade due to their ability to mimic, and many birds are illegally smuggled out of the wild. In an area of Guatemala, near 100% of the known nests were poached during a study on the birds. Survival rate for illegally smuggled parrots is very low.

If you are interested in having a parrot as a pet, do extensive research before deciding. Parrots are long-lived birds, and may outlive many humans. They require lots of stimulation, enrichment, and attention. Additionally, Yellow-naped Amazons are not good first-bird pets due to their sometimes difficult temperament. If you are determined in getting a parrot, please consider getting a rescued parrot as opposed to a young/baby parrot to avoid the risk of getting a parrot that was smuggled from the wild (a very traumatic experience for birds) and supporting the illegal pet trade. The Oakland Zoo is a conservation partner to Mickaboo Companion Bird Rescue, a good organization from which to adopt.

The green and yellow feathers on the Yellow-naped Amazon help them camouflage in Central American forests.

Birds can see beyond the visible spectrum into the ultraviolet range. Though male and female parrots look the same to us, under ultraviolet light, males are usually much brighter!

Yellow-naped Amazons will sometimes eat flowers, and so are considered pollinators because the pollen gets on their feathers as they visit each flower.

The pupils of the Yellow-naped Amazon will expand and contract repeatedly when the bird is excited.