A distinguishing feature among Leopard Gecko is the appearance of movable eyelids which is unique to this species of Gecko. Leopard Geckos however, lack adhesive lamella, or the toe pads other geckos possess, these pads are replaced by claws on each toe. Reaching a size of 10 inches, Leopard Geckos start life rather large at 3-4 inches in length. Ranging in colors from light tan to deep yellow, Leopard Geckos have a series of dark patterned spots covering their dorsal and ventral side. Their backs are also covered in small, raised indentations giving a bumpy texture. This gecko has a large, bulbous tail accounting for up to 1/3 of its body length and up to 1/4 of its weight. The Leopard like spot configuration and the addition of small raised bumps along the Geckos back give it a rocky appearance when viewed from above, allowing it to blend into its surroundings as a form of camouflage. Like all lizards, Geckos are capable of autonomy, losing their tails when threatened, they are able to grow it back given a proper diet and time.

Leopard Geckos, like other “Fat-Tail” Geckos store large amounts of fat in their tail bulge which is used for supplemental nutrients when food sources are scarce. 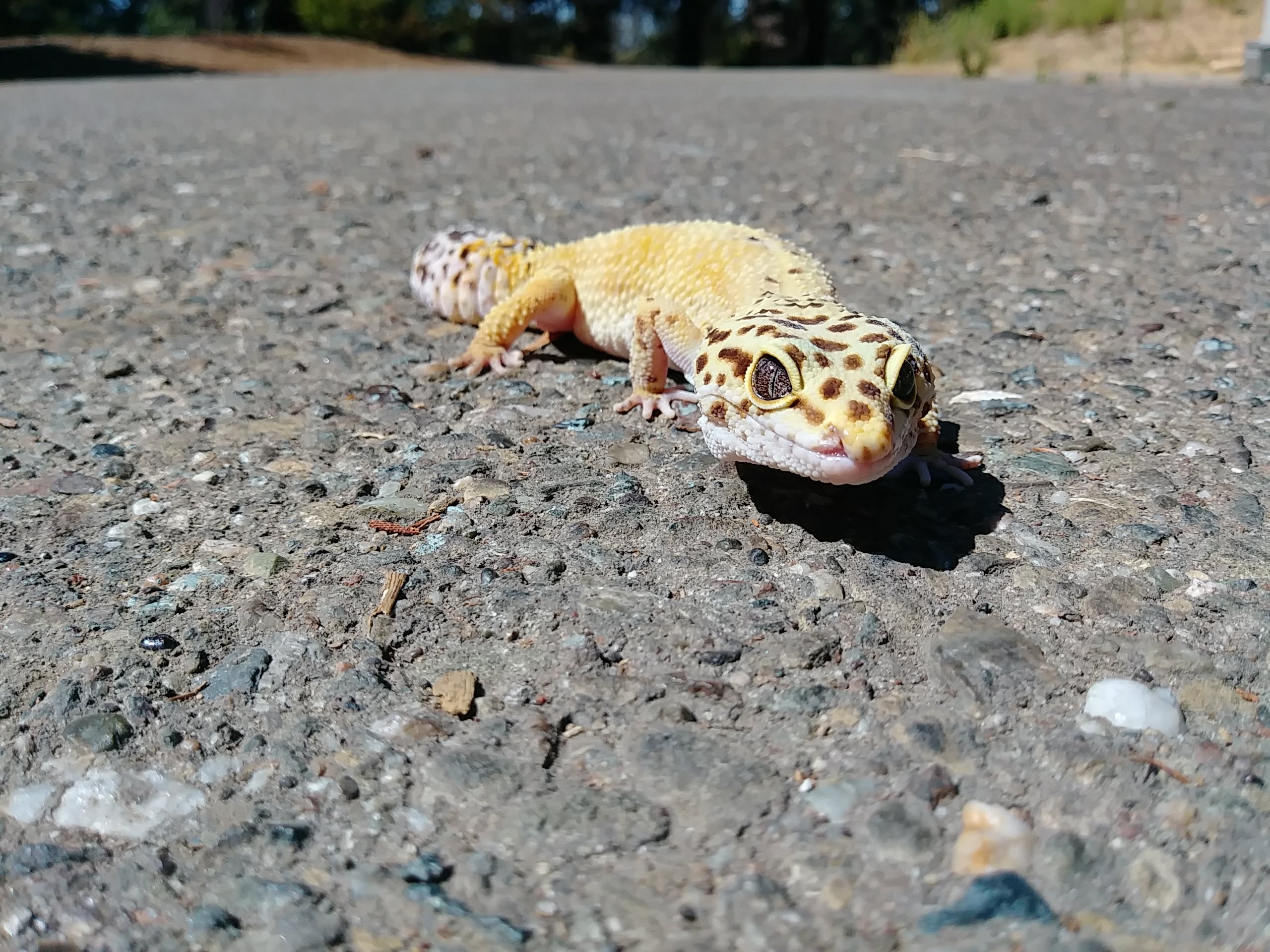 Found throughout Asia and the Middle East although primarily located in areas of Northern India, Pakistan, Afghanistan and Iran in arid, mountainous deserts. Leopard Geckos prefer a rocky substrate to a sandy substrate and are almost always found on rocky outcroppings.

Habitats: Fulfilling a niche in a sparsely inhabited desert region, Leopard Geckos are crucial for the local food chain, preying on and being preyed upon by multiple producers and consumers. Being an insectivorous gecko, they help to keep populations of crickets, beetles and even spiders and scorpions in check. Wild Diet: Natural insectivores, Leopard Geckos will prey upon anything small enough to catch. Ranging from Scorpions to Spiders they will also eat centipedes, beetles and often other lizards. Fascinatingly to researchers, Leopard Geckos are one of the few species of Gecko to consume their shed skin when finished molting. Predators: Fox, Snakes such as the Sand Boa and Cobra, Birds and small Mammals." 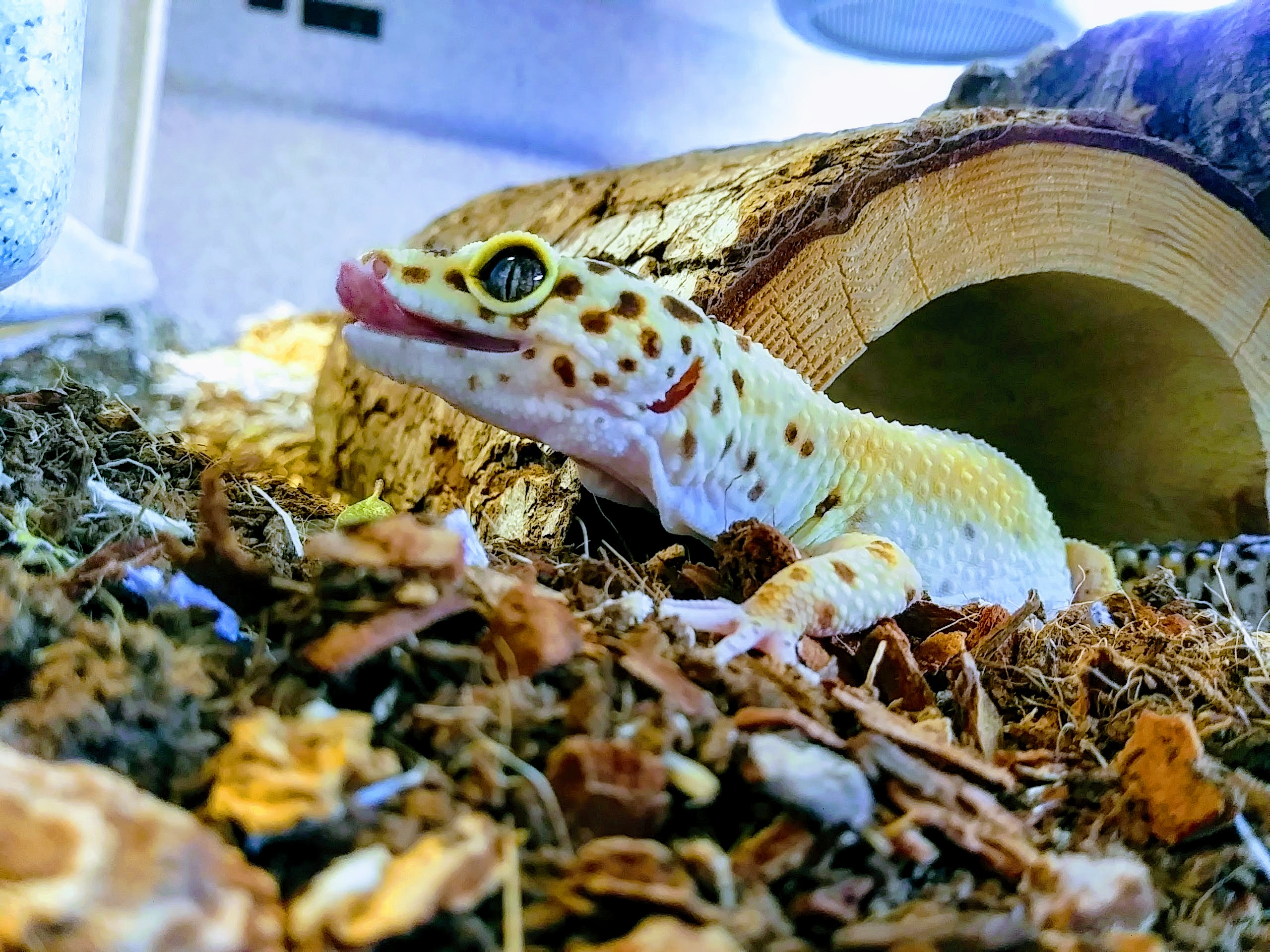 Varying on the time of year Leopard Geckos activity is temperature dependent like most reptiles. Nocturnal tendencies occur in warm summer months where other times of the year geckos are in hibernation or more pronounced activities in the day light hours for basking in the available sunlight.

When they have finished molting, Leopard Geckos will consume their shed skin. Researchers have two explanations for this behavior; one being a way to retain nutrients lost in the shedding process, and the other being a mechanism they have adapted to conceal their presence from predators.

Leopard Geckos are considered unusually docile in nature which has allowed them to be exploited for the pet trade. However, in mating season male geckos become aggressive towards one another. Tail flicking is a display to warn other males of their presence and willingness to compete for a mate. Males will bite each other’s tails and wrestle to gain dominance and subsequently a mate.

Leopard Geckos mate after dominance has been established between males. Mating occurs after the winter dormancy period and after females have shed, typically from January until March in the Middle East. Breeding season is very sensitive for these geckos and is dependent on temperature, daylight and food abundance, as such special care is taken with private breeders to mimic winter conditions which prepare geckos for breeding. Although males compete for access to females, females can still choose her mate and will aggressively attack the male or run away if not interested.

Hatchlings are born precocial and are able to fend for themselves without parental care within moments of hatching.

Given its vast distribution from India to Turkey as well as the hostility of the terrain and war violence, it has been difficult for researchers to conduct safe assessments of wild Leopard Gecko distribution. However, in regions suitable for study, it is found that Leopard Geckos are in stable populations and are not susceptible to decline. It is reported to be “not a rare species” by ICUN and is not listed by CITES.

Any differences in historical populations are attributed to collection by the pet trade dating back to the 1900s. Much of its habitat lies within protected ecological parks and are not at threat from habitat loss.

As part of our efforts to educate the public on the harmful effects of the exotic pet trade Oakland Zoo has in its Education Animal Collection 1 Leopard Gecko who is used on community programming.

You can help keep wild Geckos safe by not purchasing pets that have been wild caught. Buy your pets only from trusted dealers and breeders as it can have a negative effect on natural populations.